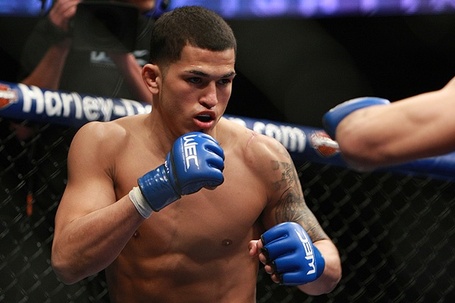 And you might be surprised by who "Showtime" beat out to get on the show:

"The WEC recommended a couple fighters to MTV, had a couple guys send in tapes, and they chose me out of I think four other guys. I know Urijah Faber was one of them, I forget who else ... Jenks said my show was one of the best they did. They followed me for about 12 days. One of my closest friends, Pat Barry, and I were talking about the show and what wold happen if I got knocked out in the WEC and then it aired on MTV. Luckily it didn't end up that way. I haven't had a better knockout than that my whole career. It couldn't have gone better."

Newly-named WEC lightweight title contender Anthony Pettis has had a pretty good week. A couple days after being told he'd be challenging Ben Henderson for 155-pound gold, more than two million people tuned in to MTV's "World of Jenks," a show that documented the lead up to his fight with Danny Castillo at WEC 47. "Showtime" told Larry Pepe on Pro MMA Radio that he actually got the nod over WEC poster boy Urijah Faber to be filmed. Thoughts on the show? Despite the incorrect spelling of Pat Berry, er, Barry, did you enjoy it? Any newfound Pettis fans out there?