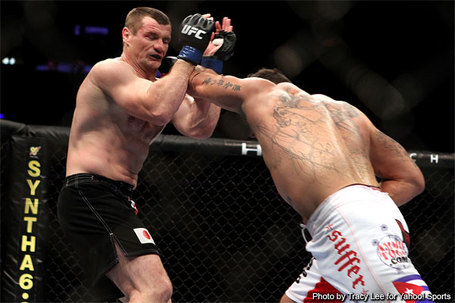 So says Kevin Iole at Yahoo!Sports this morning after Frank Mir and Mirko Cro Cop "played patty cake and hugged each other" for 14 of 15 minutes.

A sad reality not lost on the former champion:

"It was a pretty shitty performance. I could have pushed the pace a bit more.... At least I could take an easy breath that if didn't go to a judges decision. I'll make the statement that shitty win is better than a shitty loss. That being said, it's only a highlight. I'm completely pissed off with my performance."

So "shitty" that UFC President Dana White refused to award a "Knockout of the Night" bonus even though Cro Cop was absolutely leveled in the final moments of the fight. Mir certainly added a fantastic finish to his career highlight reel over a legend, but it may always have an asterisk next to it because of the 14 painful minutes that preceded it. Is this all much ado about nothing -- the critics are being to harsh -- or is all the flack justified after their performances? Can you name a more disappointing main event? Let's hear your top five in the comments section below.