Share All sharing options for: Boo-hoo: Sean Sherk confused with fan reaction after decision win over Evan Dunham at UFC 119 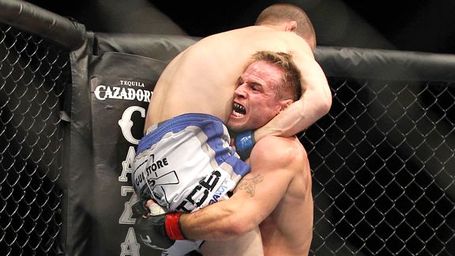 "I knew the fight was close. I think I had the first round pretty decisive. The second round was close. And the third round, I would give that to Dunham. So it depends on what the judges are watching. Anytime you go to a judges decision you're at their mercy.... We were throwing down out there -- he was hitting me hard, I was hitting him hard, he was bleeding all over the place. It had to be exciting. If I was a fan I would have had a good time, so I don't know why [the fans] are booing me. We went out there and threw down. We left our hearts out there. There was nothing left inside that Octagon."

Former 155-pound champion Sean Sherk still couldn't get his arms around the reason fans at the Conseco Fieldhouse in Indianapolis, Indiana, reacted the way they did after his split decision win over Evan Dunham last night at UFC 119. "The Muscle Shark" argues that he took the first and and at the very least split the second, which was good enough despite losing the third and final round. It was certainly razor thin, considering that the previously undefeated Dunham started to punish Sherk at the end of the second round and kept going until the very end. Sherk also survived several submission attempts, which he admitted were tight, but never really all that dangerous. Sherk, on the other hand, never attempted a submission and didn't really hurt the Xtreme Couture product with the exception of opening up a grisly gash above his right eye with a well-placed elbow in the opening frame. Is it possible that all that blood influenced at least one judges decisions or did Sherk do enough with his wrestling and ground and pound to earn the victory outright?