WEC 53: Ben Henderson to defend title against Anthony Pettis on December 16 in Arizona

Share All sharing options for: WEC 53: Ben Henderson to defend title against Anthony Pettis on December 16 in Arizona 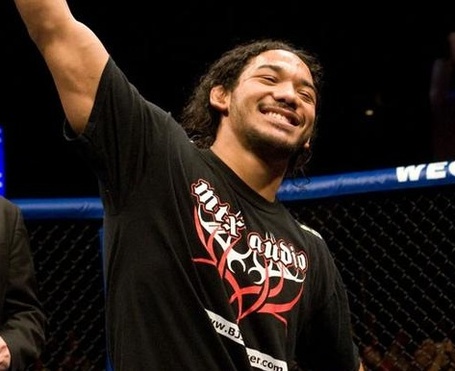 The WEC lightweight crown will once again be on the line as Ben Henderson is set to defend his title against Anthony Pettis.

MMA Weekly brought word of the the title bout earlier today, which is set to take place on December 16 in Arizona.

"Bendo" captured WEC gold in an interim title fight against Donald Cerrone last fall at WEC 43 and has yet to relinquish it. After winning the undisputed championship against Jamie Varner at WEC 46, "Smooth" once again got by "Cowboy" to retain the belt with a quick submission win at WEC 48.

Henderson has won 11 straight contests en route to asserting himself into the discussion of the best 155-pounders in the world. He'll have to get by a fast-rising star in "Showtime" Pettis to remain there.

Pettis, just 23-years-old, has quickly risen to the top of the WEC lightweight fold going 4-1 with the promotion. He was last seen defeating Shane Roller via submission at WEC 50, which is no small feat.

With a "Knockout of the Night" and a "Submission of the Night" award to his name, the well-rounded Duke Roufus-trained fighter has all the tools to one-day be a champion.

Will December 16 be that day?

Keep it locked to MMAmania.com for more news on WEC 53 as it breaks.