Joe Soto: 'It would suck to lose to a dirt bag like Joe Warren'

Share All sharing options for: Joe Soto: 'It would suck to lose to a dirt bag like Joe Warren' 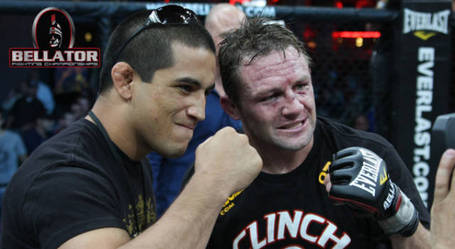 "I think I'm a lot better rounded that he is. This isn't a wrestling, this is MMA. We don't know whose wrestling is going to be better until we get in there. I'm more well rounded - I'm going to kick his ass. It's going to take a different opponent for me to lose this belt - not Joe Warren. I've grown a lot in this sport, but I feel like I haven't gotten the opportunity to use all of my tools. Maybe Joe Warren will push me to use all of those tools. It would suck to lose to him; I never want to lose to a dirt bag like that."

With Bellator 27 set to take place tonight from the Majestic Theatre in San Antonio, Texas, the promotion recently distributed a few quality quotes from their current featherweight champion Joe Soto. And by quality I mean unfiltered thoughts designed to get a rise out of challenger Joe Warren. Soto will put his title and undefeated record up against Warren who burst onto the MMA scene with his upset of "Kid" Yamamoto at DREAM.9 last year. Let's get some predictions on this intriguing battle of wrestlers.