Roger Huerta on street fight: 'I would do it again, I have no regrets'

Share All sharing options for: Roger Huerta on street fight: 'I would do it again, I have no regrets' 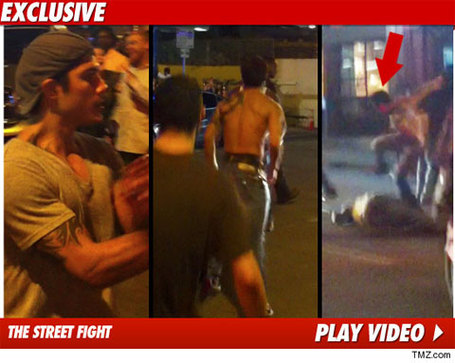 Roger Huerta discusses what went down on TMZ Live after he saw Rashad Bobino coldcock a helpless woman in the streets of Ausitn, Texas:

"I approached the man and said, "You don't do that. You don't hit a woman." The video doesn't show what happened next, but he said, "F--- you. I'll knock any b---- out I want." The tape also doesn't show that he swung at me two or three times right after that. All you see is me bouncing up and down. He has already swung at me at that point. Then the guy takes off running. I chased him down and you saw what else happened... I can't talk about what exactly happened because it's a legal metter... If the same thing occurred, I would do it all over again. I have no regrets."

Earlier this month, former UFC lightweight and current Bellator fighter Roger Huerta reached a whole new level of stardom thanks to a video of him stomping out a wannabe tough guy who inexplicably sucker punched a woman outside of an Austin, Texas bar. The story has been well documented, and while it earned "El Matador" heaps of respect from just about every person on the planet, it also potentially brought upon some unwanted legal issues. Huerta returned to the scene of the crime, not Austin, but TMZ, to talk about the famed incident. He says he has no regrets. Should he?