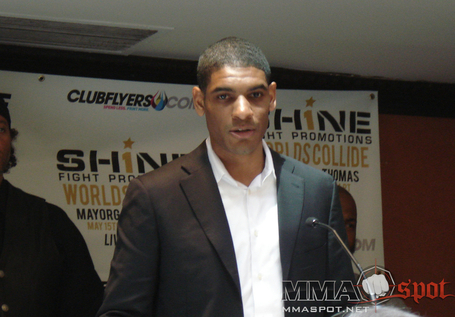 "I have not been paid in any way by Shine. Ron Foster, my only contact who bothered returning my calls, has apparently been fired by the company. Dorian Price, Devin Price, and Jason Chambers have all ignored my every attempt at communication. I haven't received as much as a text message concerning reimbursement. In all my 60 pro and amateur fights, I have never been so disrespected or felt so disposable. My experience with Shine has been nothing short of chaotic; everything from my opponent (who changed five times), to plane tickets (which we got 12 hours before we left), to hotel accommodations was a disaster. The most disrespectful part of the endeavor was the total lack of communication from Shine. I still haven't heard one word from them since this disaster started."

Despite recent claims from Shine Fights CEO Devin Price to reimburse fighters who were stiffed by the cancellation of his "Worlds Collide: Mayorga vs. Thomas" pay-per-view event back on May 15, well-traveled MMA veteran Zac George insists he hasn't seen a dime -- even as the promotion moves forward with plans to stage another event on Sept. 10 in Fairfax. What recourse do fighters have against promotions that don't pay their athletes? And do fellow fighters have an obligation to refuse work knowing their combat brethren are getting stiffed by the very promotion that wants to employ them? Sound off Maniacs.