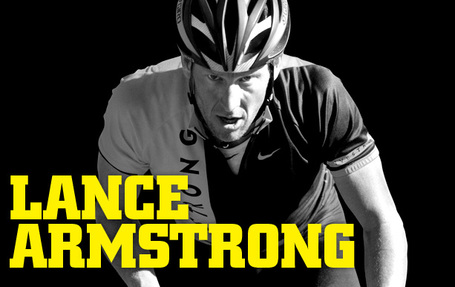 "When you screw up, you have to own it. That stuff really gets under my skin. Take Lance Armstrong. Lance Armstrong did a number of things and he gave himself cancer. He cheated, he did drugs, and he gave himself cancer. Well, instead of saying ‘Hey listen, I cheated and gave myself cancer, don't be like me.' He actually made himself the victim and then went out and profited something like $15 million dollars from this ‘Hey, poor me, let's find a cure for cancer' campaign instead of just coming clean and saying, ‘Look, here's what I did, I screwed myself up, and I hope people learn from my mistakes.' You just watch these guys and can't help but think, God, what a fraud. You got the whole Michael Phelps being a pothead thing too. I'm just glad I'm in the business I'm in so I can get them in the cage and kick the crap out of them."

Well, I guess this qualifies as an unexpected twist. Chael Sonnen has turned his focus away from Anderson Silva and onto Lance Armstrong. Yes, the guy who rides bicycles. When asked by Larry Pepe on Pro MMA Radio what really bothers Sonnnen, Chael all of a sudden went on this rant about the seven-time Tour de France victor. The number one middleweight contender alleges that Lance actually gave himself cancer by blood-doping and taking performance enhancing drugs. Once again, Mr. Sonnen didn't let a little thing like facts get in the way of spewing hot air. A quick Lance Armstrong search on Google reveals that the cyclist was diagnosed with testicular cancer in 1996, but won his first Tour de France while first being accused of using PED's in 1999. I'm surely not one to nitpick on facts when it comes to pre-fight trash talk, but in this case, the Oregon native has gone a little overboard. Where do you come out on this -- Are there any cycling fans, or virtually anybody else for that matter, who find this disturbing/irritating?