Share All sharing options for: Did James Toney beat Randy Couture at UFC 118? 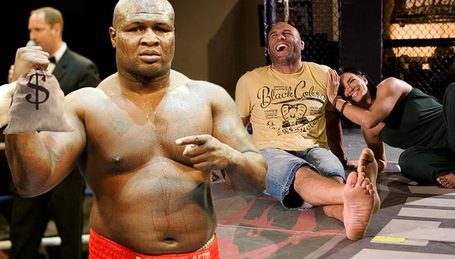 Of course he didn't.

In what was the focal point in the lead up to UFC 118, and what will likely be the focal point coming out of the event, boxing legend James "Lights Out" Toney took on MMA legend Randy "The Natural" Couture.

Randy half-heartedly shot for the takedown 20 seconds into the first round, Toney fell on his backside, and that was virtually a wrap.

Couture immediately gained mount position and followed with the usual ground and pound. Next up in the lesson of mixed martial arts was the 'ole arm triangle.

"The Natural" sunk it in, James was forced to (sorta) tap at 3:19 in the first frame. We (MMA fans) all rejoiced. Unless of course you had Toney in some exotic parlay bet. I'm not pointing any fingers...

So, with this very expected outcome, will it be one and done for Toney in MMA as he walks back to the ring with his tail between his legs? What's next for Couture? A return to the light heavyweight division in an attempt to reclaim the title one last time?

Let's hear some thoughts on this battle of fight sports and the future you envision for these combatants.