Scott Coker: 'My feeling is maybe Fedor should fight Alistair Overeem and the winner gets Fabricio Werdum'

Share All sharing options for: Scott Coker: 'My feeling is maybe Fedor should fight Alistair Overeem and the winner gets Fabricio Werdum' 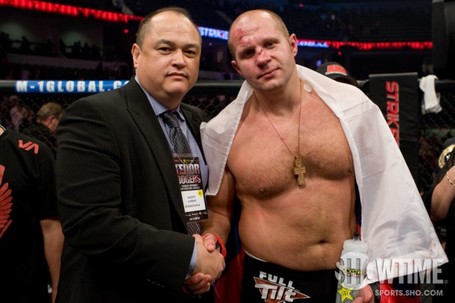 "My feeling is maybe Fedor should fight Alistair Overeem and whoever wins that fight gets to fight Fabricio Werdum. I would love to see that fight too, Alistair and Fedor, I would love to see that fight happen. Here's the thing, we just saw Fedor fight Werdum; I'm not saying we couldn't do the rematch [Fedor vs. Werdum] first but I'm saying there are a couple options on the table. Until we sit down with M-1, we're just talking about different options and that [Fedor vs. Overeem] is one of the options."

Strikeforce CEO Scott Coker contemplates giving Fedor Emelianenko a shot at Alistair Overeem's heavyweight title before Fabricio Werdum, despite "The Last Emperor's" first round submission loss to the Brazilian back on June 26. The San Jose fight boss came under heavy criticism for booking Brett Rogers (off a TKO loss) against the returning "Demolition Man" last May and further complicated the heavyweight pecking order with his vision for Overeem's next title defense. Does Emelianenko get first dibs on the Dutchman's belt because it's better for business? Or is M-1 calling the shots? Let's hear some opinions on this potential match-up...