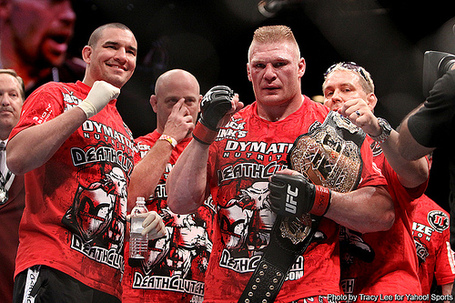 So, apparently this Brock Lesnar character is pretty popular. Say what you want about the guy, but at this point, two items are inarguable: He can fight, and people love to watch him fight.

The latest numbers for UFC 116 seem to be reporting higher. As we figured, there appear to have been a ton of replay order buys based on all the talk about the show, including all the mainstream news show coverage after the event. Various cable estimates have ranged from 1 million to 1.28 million, and as noted, internally it is being said it's the third biggest in history, which would be a lot closer to the former number than the latter number.

At the very least Brock Lesnar generated 1 million PPV buys almost entirely buy himself. His opponent on the night of July 3, Shane Carwin, did little to no promoting of this fight, purposely mind you. And the rest of the card, while it surely delivered in every way, was filled with names not known to casual fans.

With Brock set to defend his title against undefeated challenger Cain Velasquez at UFC 121 on October 23 in Anaheim, California, rest assured that the UFC will hit the 1 million PPV buy mark at least one more time this year. Going forward, it appears as though Lesnar is good for no less than that.