UFC 116: Seth Petruzelli returns to the Octagon to face Ricardo Romero on July 3

Share All sharing options for: UFC 116: Seth Petruzelli returns to the Octagon to face Ricardo Romero on July 3 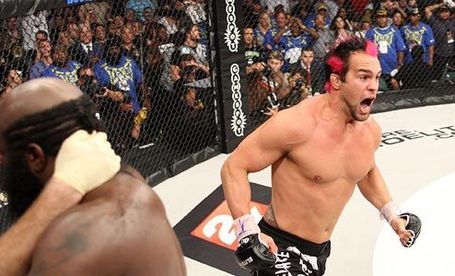 Out with Kimbo Slice, in with Seth Petruzelli. It's strange how certain people always seem to be connected in one way or another.

Just a couple weeks after Kimbo's release from the UFC following his UFC 113 defeat at the hands of Matt Mitrione, the man who (sorta) shocked the world by handing the Bahamian brawler his first ever professional MMA loss in just 14 seconds, Seth Petruzelli, has re-signed with the world's leading mixed martial arts promotion and will be facing UFC newcomer Ricardo Romero at UFC 116 from Las Vegas, Nevada on July 3.

"The Silverback" posted the good news just minutes ago on his Facebook page.

Petruzelli, a competitor on season two of The Ultimate Fighter (TUF), has won four consecutive fights since being cut from the UFC after his loss to Wilson Gouveia at UFC Fight Night 9 back in 2007.

Seth's opponent for his return bout in the Octagon is Ricardo Romero, who will be making his UFC debut at the tender age of 32.

The New Jersey native has compiled a 10-1 record during the course of his three-year career, where he has spent his entire time with the Ring of Combat promotion. He holds a notable win over The Ultimate Fighter (TUF) 10 contestant James McSweeney.

Romero will be carrying a five-fight win streak into the fight with Petruzelli, and his only loss came via a disqualification due to an illegal soccer kick.

"The Silverback" is going to have his work cut out for him from the get-go if he wants his second go-around with the UFC to last longer than the first.