Share All sharing options for: Fedor's first real loss to Fabrico Werdum comes via triangle armbar on June 26 in Strikeforce 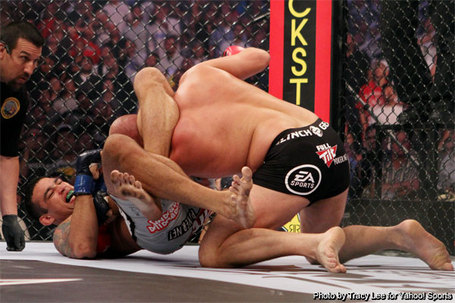 The world of mixed martial arts has been forever changed.

Fabricio Werdum has accomplished a feat that 28 fighters before him could not. He handed former PRIDE Heavyweight Champion Fedor Emelianenko his first real loss.

And "The Last Emperor" did most of the work.

After an initial flurry that put "Vai Cavalo" butt-first on the mat, an overly aggressive Emelianenko rushed in for the kill -- against one of the sport's most decorated grapplers.

The Russian made a rare error in judgment.

Werdum was not dazed, nor was he tired. He just happened to lose his legs while defensively backpedaling. Simply put, he was just as fresh and coherent as he was the moment he entered the cage.

And Fedor was in his world.

Emelianenko wanted a finish and he got one. But if the single, angry tap from the wrong side of a slick triangle/armbar was any indication, he was just as upset about his predicament as his legions of fans.

Now the Brazilian moves on to face Alistair Overeem for the Strikeforce Heavyweight Championship while Fedor returns home to lick his wounds and figure out his next move.

He has but one fight remaining on his Strikeforce contract.

While it's too early to play matchmaker, the loss could re-ignite thoughts of retirement -- or it could motivate him to come back stronger than ever.

The future is unclear, as is the state of the divisional and pound-for-pound rankings. Does Fedor's first loss in nine-and-a-half years send him tumbling down the top ten list? Or does he hold strong in the top five?

That's a matter of debate, but no question the man once thought of as invincible has now been exposed as flesh and blood. Fedor Emelianenko has been defeated.

But has his legacy? That's for you to decide. Let's hear what you have to say about this shocking turn of events in the comments section below.

The floor is yours.