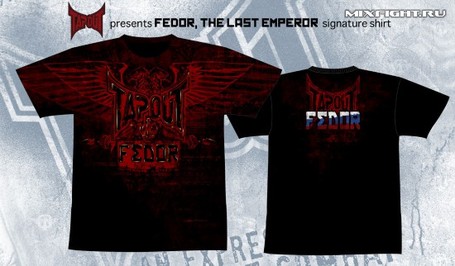 "I'm afraid to disappoint the fans, but it seems like, never. Literally today they called me from the TAPOUT firm and told me that they were contacted by the representatives of the UFC, and that under the threat of tearing up all the contracts with their organization demanded that TAPOUT categorically stop producing all the shirts from the line of Fedor Emelianenko. This is how Dana White feels about Fedor. So tell me, what can we think about such person after this, that even in things that have nothing to do with UFC, he still tries to mess it up for us. So it seems that the shirts will just stay a rarity that fans will see in pictures. Say thanks to UFC and their politics of monopoly."

Co-owner and President of M-1 Global Vadim Finkelchtein accuses the Ultimate Fighting Championship (UFC) of blocking a potential deal between Fedor Emelianenko and TapouT, the world's most recognizable brand of mixed martial arts apparel and merchandise. TapouT produced a Fedor shirt that will probably never see the light of day under threat of a lifetime ban from the UFC. Is this just business 101? Or a slap in the face to a company that helps provide for many of today's (and yesterday's) top fighters?