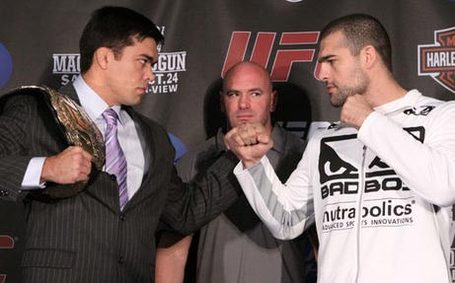 UFC 113: "Machida vs. Shogun 2" had a bit of everything for fight fans. We saw mixed martial arts at its highest level as Shogun Rua captured light heavyweight gold from Lyoto Machida. Josh Koscheck earned a shot to battle Georges St. Pierre for his welterweight title later this year with his unanimous decision victory over Paul Daley. And of course, we were all witness to Mr. Kimbo Slice's swan song as a Zuffa fighter.

According to Dave Meltzer of the Wrestling Observer (subscription required), courtesy of MMA Payout, the event did just over 500,000 pay-per-view buys. Meltzer does note however, that these numbers are just an early estimate, and that it is quite possible that UFC 113 drew as many as 687,000 buys.

Early reports on UFC 113 on 5/8 in Montreal have the show doing 520,000 buys, slightly above the 450,000 that the first Lyoto Machida vs. Mauricio "Shogun" Rua fight did. We should note that there were cable reports as high as 687,000 for the show, and trending patterns were only slightly behind GSP vs. Dan Hardy and the highest besides that show since August, which would also indicate something closer to the latter than the former. There are a lot of other measures that also indicate the higher number, but as far as the number of buys from people who would have the numbers and that can be confirmed, the lower number is the best number we've got.

If the numbers end up being around 520,000 or so, you'd have to think it would be a bit of a disappointment for the UFC. Many industry insiders estimated that UFC 113 would fall in between the 600,000 - 750,000 PPV buy range. It may speak to several items, most notably of which is that Kimbo Slice's drawing power doesn't translate to pay-per-view as well as it does network television, in turn, more than justifying the UFC's decision to release him.

But regardless of what type of final PPV numbers UFC 113 did, Zuffa is undoubtedly in store for a fruitful summer. With UFC 116, UFC 117, and UFC 118 stacked up back-to-back-to-back in the coming months, fight fans and the UFC are set up for big business.