Share All sharing options for: Andrei Arlovski: 'I'm 15-8 right now and it's horrible' 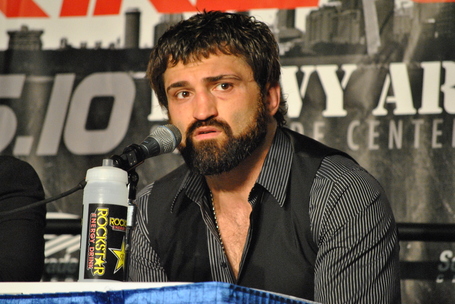 "I feel kind of upset because I put down my trainers. We had a great camp. I don't know, after 11 months (out of action) it's kind of hard to come back, but I think I did okay. I took his couple of shots on my chin. I guess I showed the fans my chin's not weak. It was a tough fight. He's tough. It just wasn't my night. Right now I'm focused on my MMA career because when I took the fight on short notice against Brett Rogers my mind was focused on my pro boxing and as a result he knocked my ass out in less than 20 seconds. Of course I wanted to box, but in MMA I have three losses in a row. I'm 15-8 right now and it's horrible. I just have to train I guess even harder and try to fight even harder. I feel great. I could fight maybe tomorrow. It's up to Scott Coker. I want to fight, fight, fight."

A disappointed Andrei Arlovski reflects on his losing performance against Antonio Silva at Strikeforce: "Heavy Artillery" last Saturday night (May 15) in St. Louis. The former UFC Heavyweight Champion has pretty much hit rock bottom, having dropped three consecutive bouts -- two of them under the Strikeforce banner. "The Pitbull" vows to be back and Scott Coker sounds more than happy to have him, but can the Belarusian recapture the mojo that made him one of the sport's most popular fighters?