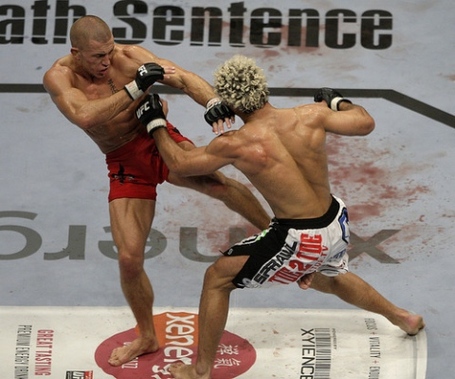 "I liked the comment that he made at the end [of his UFC 113 fight with Daley]. It was awesome. He's a perfect villain. I like him even more cause of this. I like Josh Koscheck, he's awesome. It's going to build up the fight better saying bad things to each other [laughs]. It's normal. He's confident coming into that fight. He's a fighter. For sure if he doesn't think he's going to win the fight, he's not going to take the fight. It's going to be up to me to prove him wrong. I put myself in his shoes with the people booing him. It was just very funny what he said. As long as it's a fair fight and there is no biased judges, everything is fair. I'm agreed to do it wherever it is. I don't care... He's a different fighter than when I fought him the first time. The first time I had the element of surprise. I was able to take him out of his comfort zone by using my wrestling skills. He didn't know how my wrestling was. This time I don't have this element of surprise, but I'm going to have to use another element of surprise you guys might find out in the fight."

UFC Welterweight Champion Georges St. Pierre talks to MMA Weekly about the man who will be challenging him for his belt come December, Josh Koscheck. Of course the two gentlemen are going to share camera time on the upcoming season of The Ultimate Fighter, which is scheduled to premiere in September, and from the sounds of it, it appears "Rush" is going to get along with Josh just fine. GSP is never one to partake in too much extracurricular activities in the lead up to any fight, and it seems as though we're in for more of the same this time around. But with several months to go before they actually square off inside the Octagon, do you think Koscheck will be able to push the buttons of the champ and get him to engage in some pre-fight verbal warfare? Or, are we gonna be in for a relatively boring seven months, TUF included, as we head towards the welterweight title fight later this year? Opinions, please.