UFC 113: Matt Mitrione doesn't plan on being a punching bag for Kimbo Slice

Share All sharing options for: UFC 113: Matt Mitrione doesn't plan on being a punching bag for Kimbo Slice 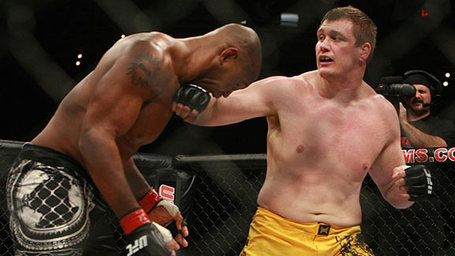 "You know he did a lot to bring a ton of attention and ratings to TUF. I say good for him, great for him. I mean Kimbo is a cool ass dude. He is humble and from what I saw has a really good work ethic. I was really impressed with him and having nothing bad to say about Kimbo whatsoever. I think he has some power. He seems pretty quick and relatively athletic. He seems pretty aggressive. Honestly I don't see too many things that will be bad for me. If he wants to stand and bang with me, cool! I don't think there are too many people that can take what I throw to the chin. I'm excited; I'm long, strong and athletic. I'm in pretty good cardio shape. I don't see any drawbacks to the fight. If I stand there like a punching bag then it might be different. I don't see that happening."

Former Minnesota Viking Matt Mitrione is out to prove he's more than just a heavy hitter with a quarter tank of gas when he collides with fellow Ultimate Fighter (TUF) 10 contestant Kevin Ferguson at UFC 113 on May 8 from the Bell Centre in Montreal. "Meathead" retired Marcus Jones via second round knockout at last December's TUF 10 Finale but expects a stiffer test against "Kimbo Slice" a week from Saturday. Anyone think this one is going past the first round?