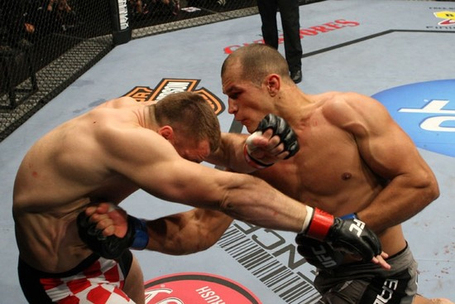 Promoted from FanPosts and authored by "Ain't No Sunshine."

Previously, I made a post dedicated solely to the art of boxing and what makes it effective. Of course in mixed martial arts there are several types of striking -- all of which can be effective.

However, with the viscious knees and elbows of Muay Thai, the exciting head kicks and menacing leg kicks of kickboxing and the newly appreciated techniques of Karate, sometimes Boxing can be overlooked.

See the link above more details on that analysis.

Today I would like to explore and break down one important item that I did not get much into previously: The body shot. We have seen many fights being dictated and won by using a varied striking arsenal and we have seen fights nearly ended or finished due to a final body blow.

Let's dive right into this.

Maybe one of my least favorite things I want to experience in the entire world. A game changer when utilized correctly. One of the guys that uses this in his arsenal the best (in my opinion) is Nick Diaz. His striking is very unorthodox from the angles of strikes right down to his stance; however, he has crumbled opponents in the past by using powerful and accurately placed body shots.

I used powerful for a reason.

Nick Diaz at times seems to throw loopy, even sloppy strikes, but what Nick lacks in technical form he makes up in accuracy and power. Effective body shots do require power and strength yet the results are still far and away nothing short of devastating. What's important to realize in the upcoming GIF is the beauty of the set up.

To demonstrate this lets take a look at Nick Diaz as he battles Marius Zaromskis.

A thing of beauty, the set up of a body shot can't be done any better then here.

First, you may notice that a lot of the punches thrown look more like pawing and mixed in between those are some serious power punches. To begin the clip, Nick throws six different punches to the face of the "Whitemare." All unanswered, all landing on different areas of his upper body. Also notice that they are thrown at different angles.

After several strikes high up on the torso our natural defensive mechanisms start ignoring our mid-sections to protect the face which is being bombed by punches. It also doesn't help Zaromskis' case that he is already leaving himself open with his head down and his hands protecting the face. Nick lands a power shot in form of the uppercut followed by some hooks which immediately leads to Nick landing his first body shot that almost completely crumbles Zaromskis.

That extremely hard shot to the body is followed six more strikes to the face. Now, if you guys haven't experienced a body shot, its tingling and it makes you wish you could crawl into the fetal position. Marius hunches over after the initial body shot now clinging lower to protect the middle and now once again had punches landing on his face. Then after abusing his face Diaz once again returns to land another body shot, followed again by more punches high.

Whats important to look at here is the set up. He changes angles, he throws different types of strikes all high up to the face, he also throws different strikes of various power and velocity and when his opponent is caught strictly attempting to deter his face strikes, Nick lands his body shots. So what does an opponent do when he is hit from every angle and he can't possibly protect himself all at once? He crumbles and that's exactly how the rest of the fight goes.

We will stay on Diaz.

Remember I said body shots want to make you crawl into the fetal position? Frank Shamrock did just that after Nick landed this ferocious shot to the mid-section. Nick's striking has always been dangerous and here we see just one reason why. Although, I do wish the GIF started earlier we still see a very important sequence.

Frank is already badly hurt and pressed into the cage (two No-No's.) Diaz has his lazy feeler jab in front of Frank's face and when the right hand starts to come forward Frank covers the face first and clenches to cover the body late and consequently eats a nasty and powerful body shot. The punch had the power to KO Frank anywhere on his upper torso and this one just so happened to land on a very tender and vulnerable spot with Nick throwing his weight and momentum into the punch. 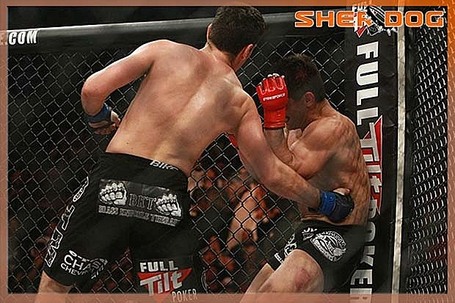 First we see the set up with the feeler jab which has Frank second guessing what Nick's next move will be and the finish which is Diaz delivering the body blow. Diaz throws a lot of feeler jabs, a lot of hooks with reduced power and it almost seems like he is just pawing at his opponents. He seems to prefer quantity over quality in theory however his quantity strikes often are very quality in the end.

If you go back to watch the fight vs. Takanori Gomi you can see the damage done by these strikes. In order to be successful working the body you have to have a wide array of strikes in the tool box, the key to an efficient body strike is keeping your opponent unaware of the strike about to come. This becomes even more dangerous when you set up a quality body blow game and thus your opponent fearing the body strike leaves his hands down and chin out.

Now I know this isn't MMA but The Pac-Man demonstrates what I am saying perfectly.

He establishes his body work which draws his opponent to drop his hands and Manny lands a punch flush to the jaw. Just the flurry here shows head-body-head. A successful use of variety within the combo. A great striker exploits all advantages and using the wide array of strikes allows you to keep your opponent on his heels and second guessing your next move.

So with that, the final comment on body shots are that they can be brutal and effective but we rarely see them since in mixed martial arts the kick is utilized in its place. We have seen body kicks end fights (Franklin vs. Hammil) and dictate the fight as well (GSP, Lyoto, Cung Le).

And of course we have the legendary Bas Rutten who made a career out of the body blow. More fighters are using the body strike however as seen at the top. Heavyweight prospect Junior Dos Santos has made a habit in the past to be very active when working the body. Don't be surprised to see it more and more in MMA as the sport continues to evolve and as striking continues to rise to elite levels.