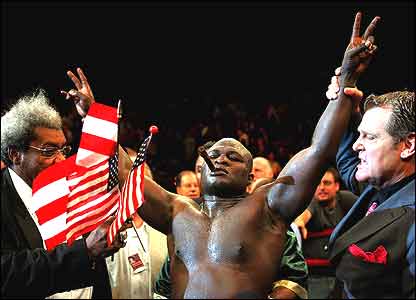 Straight from the files of "WTF?" comes the news that Ultimate Fighting Championship (UFC) has come to terms on a multi-fight contract with 41-year-old NABO heavyweight boxing champion James "Lights Out" Toney, as first reported by Five Ounces of Pain.

Terms of the contract were not disclosed; however, UFC President Dana White has confirmed the signing with MMAFighting.com.

Toney has been extremely vocal about getting his shot inside the Octagon as of late, probably after watching Ray Mercer get paid to put Tim Sylvia on queer street last year in Alabama.

And while the lack of pure boxing skills is an inherent problem within the ranks of mixed martial arts, the UFC heavyweight division is comprised of more than just a former YouTube star and some past-their prime headliners.

He may find that out sooner rather than later.

To help prepare him for his first-ever appearance inside the Octagon, Toney has enlisted the help of Juanito Ibarra, perhaps best known as the former trainer of Quinton "Rampage" Jackson.

From Ibarra, courtesy of Sherdog.com:

“We have been working on stretching, sprawling and movement, all the things he will need to get a handle on.”

The signing comes as a bit of a surprise considering Dana White's stance on "freak shows" and "special attractions." Toney may consider himself an exception based on his pugilistic resume (72-6-3, 44 KOs), but he isn't the first high-profile boxer to try his hand at the sport of mixed martial arts.

Former WBA/WBC welterweight and WBC junior middleweight champion Ricardo "El Matador" Mayorga recently signed on to face UFC veteran Din Thomas in his MMA debut under the Shine Fights banner at "Worlds Collide" on May 15 from the Crown Coliseum in Fayetteville.

At this time there are no details regarding either a time line for Toney's Octagon debut or a potential opponent. Naturally that will be one of the 1000+ questions most of the MMA community will have for Dana White after it's officially announced.

In the meantime, we can only speculate as to the deciding factor in this very unusual addition. Does anyone at Zuffa really believe that Toney has the ground skills to survive a top level wrestler like Cain Velasquez or Brock Lesnar? Or is that the point? To prove that boxers are no better than mixed martial artists when taken out of their element?

There's still a lot to find out. In the meantime, keep it locked in right here at MMAmania.com for all the gory details as they develop.