Share All sharing options for: Dana White: I was all for St. Pierre vs. Silva -- until I saw Anderson move up to 205 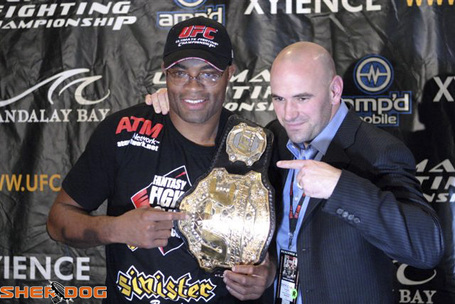 "Nobody loves a superfight more than I do, believe me. I was all about doing ( a St. Pierre vs. Silva) fight until I saw Anderson move up to 205. That guy looks like he belongs at 205. I just think you're going to see Anderson move up and not down."

UFC President Dana White doesn't foresee a possible superfight between current welterweight champion Georges St. Pierre and reigning middleweight champion Anderson Silva -- especially after "The Spider" crawled into the light heavyweight division on two separate occasions and laid waste to James Irvin and Forrest Griffin. "Rush" may not have a problem bulking up to 185-pounds, but the Brazilian has talked about a possible future at heavyweight if he's able to clean out the remaining contenders at middleweight in 2010. In spite of Dana's remarks, anyone still holding out hope for this one?