Share All sharing options for: UFC 112 results and LIVE fight coverage for 'Invincible' on April 10 in Abu Dhabi 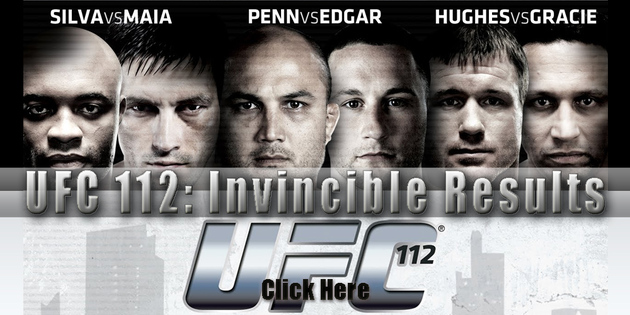 Ultimate Fighting Championship (UFC) will today (Sat., April 10, 2010) pull the trigger on its first-ever trip to Abu Dhabi when the Octagon makes its outdoor debut at the Concert Arena from Ferrari World on Yas Island.

Legendary welterweights Matt Hughes and Renzo Gracie are also booked to collide on the PPV main card, which kicks off at 10 p.m. ET.

MMAmania.com will provide LIVE blow-by-blow, round-by-round coverage of UFC 112, beginning with the PPV telecast at 1 p.m. ET. In addition, we are delivering up-to-the-minute quick results of all the under card action RIGHT NOW!

WARNING: For those who intend to watch the tape-delayed broadcast at 10 p.m. ET on PPV ... STAY AWAY FROM THIS SITE UNTIL YOU HAVE WATCHED IT. Consider this your spoiler warning alert.

Many of our readers check-in before, during and after the televised action to share their thoughts on all the exciting action. Therefore, feel free to leave a comment or 112 before you leave and chat with all the other Maniacs during the show -- it always turns out to be a great discussion.

Keep in mind that we will also be the spot for the latest news, recaps and post-fight analysis after "Invincible."

Round five: Maia's eye is swollen shut. Nice left from Silva. High kick from Silva. Maia whiffs on a take down. Maia dives in and lands a big right and a left then a uppercut!!! Maia caught Silva. Maia charges in again and lands a left and gets thrown to the mat and lands a punch from his knees!!! Maia is showing guts. Maia misses a left and he is still gushing blood from his nose. Spinning back kick from Silva and the crowd is chanting from Maia. Silva looks like he could be tired from what i have no idea. Maia shoots and has a hold of a leg and has Silva pressed against the cage. Silva slips out. Nice right from Silva. The ref stops the fight and warns Silva that he will loose and point if he keeps avoiding the fight. Thats the bell and the crowd is letting Anderson Silva have it. Maia won that round 10-9. The crowd is chanting for Maia. Silva literally shut down towards the end of the 3rd round and barely threw any strikes from then on. He just danced all fight, and now the crowd is chanting for GSP. The crowd is soundly boo'n Silva once he is announced the victor.

Round three: Penn seems to have found his distance and timing in that last round well see how that carries over in round 3. Left hook from Edgar. Big counter left from Penn. He seems to be throwing 3 punches for every 1 punch Edgar throws. BJ with a left hook. Jab from Penn. Counter left from BJ. Jab from Edgar. Nice hook from Edgar. Another good left hook from Edgar. High kick from Edgar blocked. Superman punch from Edgar followed by a take down attempt but nothing there. Nice left from Edgar and he is finding his mark with his hook. Body kick from Edgar. Bj with  a right. BJ with a knee to the body in the clinch. Penn just barely misses with a bomb of a right hand. That's the bell again, that was the closest round thus far in the fight but BJ is still controlling the action. 10-9 Penn but Edgar is starting to get off.

Round three: Final round underway. An uneventful fight thus far. Leg kick by Hughes. Jab from Hughes followed with  a leg kick. Nice left from Hughes. Jab from Renzo then a right. Renzo feeling the affects of the leg kicks now. Hughes with another big one. Nice right clips Renzo. Hughes backs away for some reason. Big leg kick from Hughes. Big uppercut from Hughes and their tied up against the cage. Hughes lands a HUGE right and then a left right combo and Renzo is hurt!!! Hughes backs away for some reason, now he lands another left and big leg kick!! Renzo is hurt bad. Big leg kick again from Hughes then a left, and now another leg kick from Hughes drops Renzo to his back!!!! Hughes doesnt pounce, Renzo gets stood up by the ref and Hughes lands another big leg kick which drops Renzo to the mat again! Hughes wont attack. Back on their feet leg kick uppercut from Hughes. Right from Hughes drops Renzo to his back again, but Hughes will not attack from there. Two more vicious leg kicks from Hughes. Double jab BIG uppercut left hook and another uppercut from Hughes and thats it the fight is over!! Matt Hughes with a TKO win. Renzo's leg is battered and he just couldnt stand on his feet any longer it was only a matter of time.

Round one: Grove looks intense, Munoz looks relaxed. Let's see if there is any foreshadowing. Both fighter start cautiously, shadowboxing an taking things easy. Munoz dives for a takedown with his worldclass skills and takes the lanky Hawaiian to the ground. Grove is able to make his way to his feet quickly, but Munoz lands a few good strikes on his way up. Munoz goes in for another takedown almost immediately, which Grove times perfectly with a huge uppercut that rocks the collegiate wrestling standout. Munoz is hurt! Grove goes in for the kill, but Munoz turtles to defend any additional punishment. He's just hanging onto the leg of Grove, attempting to get his wits about him. The referee breaks them apart because of the lack of action. Munoz lands a nice right, and a left, on the feet and dives in for another takedown. Grove sprawls and gets Munoz in a guillotine. He rolls Munoz, but it's not tight enough and he's able to escape. Back to the feet and Munoz goes for yet another takedown. Grove, again, defends nicely, and locks-in another guillotine. This one looks tight! Munoz somehow escapes and the round ends with him sucking wind.

Round two: Munoz comes out looking for another takedown, but settles for a big right hand. And another one, which sends Vaseline flying of "The Spyder's" face. Grove gets Munoz in a Muay Thai clench and drills him with a knee to the face. Munoz drops and Grove takes his back instantly, looking for a rear naked choke or some other submission. Munoz somehow squirts out from the bottom and lands in Grove's full guard. Here comes the ground and pound! Munoz is relentless, working the body and the face in almost equal amounts. Both fighters take a break and Munoz and gets to his feet while Grove keeps him at bay from the ground with his long limbs. Munoz dives in with a huge punch that stuns Grove. It's a Blitzkrieg ... a flurry of punches that Grove simply can't escape. He rolls to his belly and Munoz boxes his ears until the referee steps in and stops it. That's it! Great come-from-behind victory for Munoz.

Round one: Etim with inside leg kick. High kick from Etim. Leg kick from Dos Anjos. Etim inside leg kick again. High kick from Eitm, Dos Anjos shoots for the take down. Etim has a guillotine choke locked in tight but Dos Anjos seems to be holding off. Etim just doesnt seem to have the right placement on this choke. Dos Anjos pops his head out after almost a minute and half in a choke. Dos Anjos now landing big knees from side control. The ref stands them up now. Superman punch from Dos Anjos. Great straight left from Dos Anjos and now their tied up against the cage. Etim drags it to the floor and is stacked up on Dos Anjos and then frees his leg from a close heel hook and is now on top in butterfly guard. Etim gets to full guard and is now throwing some punches. Dos Anjos angling his body for a submission but the bell rings. Awesome 1st round good action Etim gets the nod but not by much. 10-9 Etim.