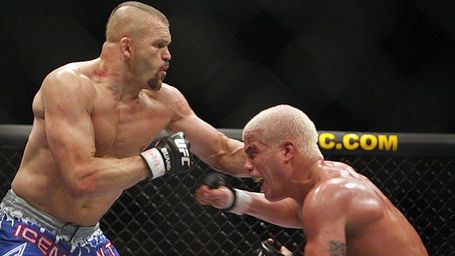 Octagon pioneers and longtime rivals Chuck Liddell and Tito Ortiz should finally see the conclusion of their fight trilogy at UFC 115 in Vancouver, as "The Huntington Beach Bad Boy" maintains their fight is still set for June 12 following their duties as coaches on the upcoming eleventh season of The Ultimate Fighter (TUF).

Ortiz confirmed the bout is still on with Josh Gross of SI.com -- despite recent reports that he was forced to bow out of the contest due to a laundry list of personal and medical problems.

Liddell (21-7) hasn't competed since a technical knockout loss to Mauricio "Shogun" Rua at UFC 97: "Redemption" from the Bell Center in Montreal, Quebec, Canada, back in April 2009. In fact, since his last stoppage over Ortiz, he's only had one victory in five attempts, a gritty unanimous decision win over Wanderlei Silva at UFC 79 in Dec. 2007.

Company president Dana White tried to convince his good friend and big time money-making machine to hang up the gloves, saying he had made a ton of cash and had nothing left to prove. Liddell — who will be 40 years old by the time the third Ortiz fight rolls around — was adamant that he's still got some fight left in him.

The icy one just wanted a little time to "give his brain a rest" -- and tear up the dance floor on ABC's "Dancing with the Stars."

Now it's back to business for the former light heavyweight champion -- who is undoubtedly planning for a hat trick against his fellow fading star.

Ortiz (15-7-1) has also struggled inside the Octagon, failing to notch a win since abusing a geriatric Ken Shamrock at UFC "The Final Chapter" in October 2006. He most recently coughed up a split decision loss to Forrest Griffin in the UFC 106 main event from the Mandalay Bay Events Center in Las Vegas this past November.

Following the fight -- his first since returning from major back surgery -- the former 205-pound kingpin complained of a "cracked skull" and other maladies, including an empty gas tank. While the medical layoff was behind some of his rust, it's been evident for some time that Ortiz is no longer the dominant force he was in the early 2000's.

But has he held up longer than Liddell?

It will be interesting to see how the coaching gig on TUF 11 -- a second go-round for both fighters -- will prepare them their third dance. The Spike TV reality show returns on March 31.

Stay tuned to MMAmania.com for future updates on this still developing fight card, which came just days after MMA received final approval for sanctioning in Vancouver.

In the meantime, any guesses on who takes this final battle?