UFC 111 results and LIVE fight coverage for 'St. Pierre vs Hardy' on March 27 in Newark

Share All sharing options for: UFC 111 results and LIVE fight coverage for 'St. Pierre vs Hardy' on March 27 in Newark 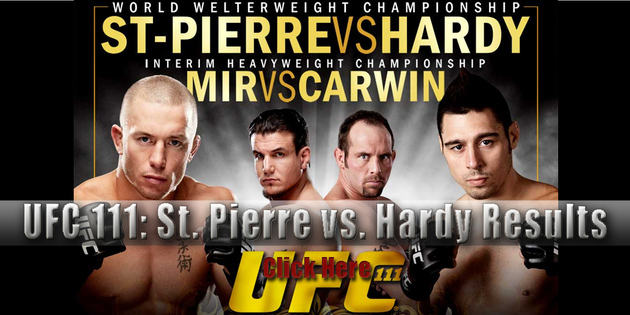 UFC 111 will feature two title fights atop the card, including a 170-pound title defense by promotion superstar Georges St. Pierre as "Rush" answers the call of British striker Dan "The Outlaw" Hardy. In addition, heavyweights Frank Mir and Shane Carwin will collide to determine the next challenger for returning champion Brock Lesnar.

MMAmania.com will provide LIVE blow-by-blow, round-by-round coverage of UFC 111, beginning with the Spike TV broadcast at 9 p.m. ET. We'll then roll right into the PPV telecast at 10 p.m. ET. Up-to-the-minute quick results of all the other under card action will begin around 8 p.m. ET.

Many of our readers check-in before, during and after the televised action to share their thoughts on all the exciting action. Therefore, feel free to leave a comment or 111 before you leave and chat with all the other Maniacs during the show -- it always turns out to be a great discussion.

Keep in mind that we will also be the spot for the latest news, recaps and post-fight analysis after "St. Pierre vs. Hardy."

UFC 111 PLAY-BY-PLAY LIVE MAIN CARD COMMENTARY:
Druby here for a huge card that should bring fireworks. Sit back and enjoy the mayhem maniacs tonight should be a good one.

Round one: Hardy standing tall and looks good. GSP doesnt even waste any time and gets a lighting quick take down instantly. Hardy works his way to full guard. GSP passes to half guard and Hardy lands some punches. Side control for GSP. Hardy scrambling to his feet but GSP jumps onto his back and has both hooks in. Hardy reverses position and gets to his feet, but GSP takes him right back to the mat. GSP passes to half guard effortlessly. St Pierre mounts now!! Hardy rolls and gives up his back again and GSP is high on his back. GSP has the arm bar deep!!! Its locked out big time and somehow Hardy gets out with rubber arms!!! WOW amazing escape. Not much damage done but GSP controlled the round. 10-9 St. Pierre.

Round three: Hardy throws a big right, but GSP ducks under and gets a big take down. Full guard for Hardy. Some punches and a elbow from GSP. More elbows from GSP. Nice punches for GSP. Hardy looks to have been poked in the eye. GSP postures up and Hardy looks for a triangle but GSP passes to side control. GSP looking for a kimura. Hardy slips out and avoids trouble. Side control for GSP still. Hardy to his feet and is taken right back down. Hardy scrambles and GSP has the back again. Hardy slips out but GSP uses his leg to trip him and land a punch. Pretty boring fight, but GSP is dominating. 10-9 St. Pierre.

Round four: GSP gets the take down right away with ease. Full mount for GSP and he gets the back again as Hardy scrambles. Hardy uses a leg to get on top briefly and GSP reverses instantly. GSP postures up and throws some punches. Side control for GSP now small elbows but not much action at all. GSP locks in a DEEP kimura and Hardy is trying to hold out from tapping. GSP not giving up yet though and still cranking it deep. Hardy somehow slips out of another submission. This guy must have rubber arms. Side control for GSP still. Hardy to half guard. GSP looking for a knee bar but the round ends. 10-9 St. Pierre and unless there is a miracle this fight has been long over.

Round five: Inside leg kick from Hardy. Jab from GSP then leg kick. GSP again with a easy take down and he is back on top. Hardy tries for a triangle. GSP to side control. GSP has his back again. Hardy with an elbow. Knees from the side from GSP. GSP now trying to grab a hold of a leg. Another kimura attempt from GSP. Hardy not tapping though. Hardy is out now. GSP to side control. GSP throwing some punches and elbows but not much else going on. Kimura attempt from GSP but nothing there. Hardy scrambles and GSP has his back again and gets a big slam. GSP in full guard. Leg lock from GSP but the bell rings. 10-9 St. Pierre never a doubt in this one.

Round one: Both men keeping distance feeling out the other. Mir light on his feet. Mir throws a combo and hits nothing and Carwin pushes him against the cage. Carwin holding onto a leg and throwing short punches looking for an opening. Knees from Carwin to the thigh. Body shot from Carwin. The ref breaks them up. Right from Mir barely lands. Mir charges and lands a good combo, counter right from Carwin and now Carwin pushes Mir against the cage. Quick flurry of action there. Knees to the thigh from Carwin. Carwin lands a few big uppercuts!! Now he is pounding away with vicious punches!!! Mir is hurt bad and Carwin is throwing an onslaught of bombs at Mir!! Thats it Mir is out cold and this fight is over. WOW, amazing finish from Carwin. Insane!

Round one: Saunders with a kick. Fitch with a leg kick and right to the body. Fitch clinches up and is landing some knees to the body. Saunders pushes Fitch against the cage. Fitch reverses position with double under hooks. Knee to the thigh from Fitch. Fitch now with the take down. Saunders with butterfly guard. Fitch throws the legs looking to pass. Fitch with some serious body shots. Nice punches to the head from Fitch. Fitch now into half guard. Fitch peppering in some punches trying to grind out the energy from Saunders. Nice right from the bottom from Ben. Saunders shooting his legs high for a triangle. Elbows from Saunders now. Fitch with an elbow from the top. Nice right from Fitch. Up kick from Saunders. Two big elbows from Fitch to close out the round. That was a classic Fitch round and he won it easy. 10-9 Fitch.

Round two: Inside leg kick from Fitch and then a high kick to follow. Nice uppercut from Fitch and he bull rushes Saunders into the cage and is now working a take down. Fitch picks up Saunders and slams him to the mat. Fitch relentless with his ground and pound throwing constant punches. Saunders has no answers for Fitch right now. Fitch now into half guard. Fitch landing some punches. Non stop elbows and punches from Fitch and Saunders is bleeding from his nose now. The crowd boo's and Mergliota stands them up for what reason i have no idea. Fitch with the clinch again. Fitch leaning against Saunders on the cage. Knees from Fitch to end the round. Once again another 10-9 round for Fitch. Saunders needs a prayer.

Round one: Nice right from Bocek lands flush then he goes for a shot. Miller with the sprawl and trying to defend. Bocek holding onto the single. Miller drops down for the guillotine but Bocek slips out. Miller to his feet and they both land knees. Miller with a high knee of his own. Knee from Miller on the break. Inside leg kick from Miller finds its mark. Nice right from Bocek then again he shoots and gets a big slam for the take down. Rubber guard from Miller. Brief Oma Plata from Miller and Bocek now working from side control. Miller works in half guard. Miller cranks out Bocek's arm with a kimura!! Wow this fight could be over!!! Miller sweeps him and is on top and Bocek is about to tap!!! Oh man somehow Bocek finds his way out of the Kimura. Amazing transition and now Miller is on top and doing some damage, Bocek bleeding from the head. Thats the bell close fight but Miller might have stole it with the close submission attempt. 10-9 Miller.

Round two: Right from Bocek. Bocek charges in with the take down again. He gets it easy and now moves into half guard. Bocek slides his way into side control. Miller works right back into half guard. Bocek postures up but doesnt land anything good. Bocek looking for an arm triangle choke but Miller regains guard quickly. Bocek postures up and misses again. Miller goes for a heel hook!! Bocek does two twirls and again escapes. Full mount for Bocek now. Elbow from the top by Bocek. Miller gives up his back now. Body triangle for Bocek now also. Bocek traps millers arm with his legs now!! Bocek looking for a choke. Bocek still working to soften him up and get the choke but Miller is showing awesome defense for a one armed man. Miller somehow stands up with one arm trapped to his feet and slams Boceks head to the mat!!! Thats the bell, Bocek controlled the round but Miller is still looking impressive. 10-9 Bocek.

Round three: Great fight so far here we go for the stretch run. Big uppercut from Miller to start and then a good left. Inside leg kick from Miller. Right from Bocek. Straight right from Miller and then he follows with a body shot and kick to the body. Shot from Bocek stufffed by a Miller sprawl. Inside leg kick from Miller. Jab from Bocek. Body shot from Miller. Bocek reaches for a double and Miller defends with his back against the cage. Miller lands two good knees and a right and is now going for his own take down. Bocek reverses and puts Millers back on the cage again still looking to take it to the ground. Bocek gets a high single and trip and gets a brief take down then Miller scrambles and Bocek gets an over under position. Miller back to his feet now still sprawling out. Bocek again with a high single and trip for a take down. Miller trying to reverse it and get it to the feet. Miller grabs the back for the last 10 seconds and holds on till the bell. Great fight and another close round it could go either way but because of the take downs that round id lean towards Bocek. 10-9 round for Bocek.

Round one: Jab from Camoes then he grabs a leg and spins around to the back. Their against the cage now. Wow Camoes gets a throw and lands some hammer fists. Camoes now on the back of Pellegrino while he is standing and he is peppering in some punches looking for a choke. More punches from Camoes. Camoes briefly has the choke and now has it under!! Pellegrino still on his feet while being choked!!! Pellegrino slams Camoes face into the mat and gets out of the choke!! Pellegrino has the back now and then reverses to the top. Camoes for a triangle now but Pellegrino escapes. Nice elbows from Pellegrino. Pellegrino to side control now but Camoes has hold of a choke. Pellegrino is out now and has the back but Camoes spins around back to full guard. Nice elbow from Kurt. Pellegrino controlling the action now using punches and elbows. Thats the bell and it was a close one but Pellegrino might have stolen it after and interesting near choke while Pellegrino was on his feet. 10-9 Pellegrino.