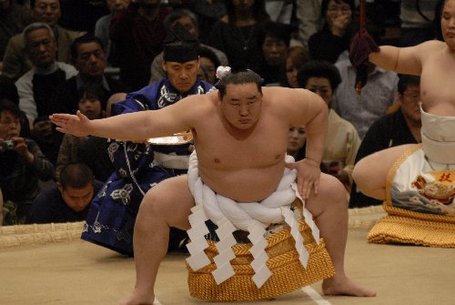 Reports have been circulating among Japanese media outlets during the last few days that Asashoryu, a recently retired sumo wrestler and one of the most successful yokozunas (sumo wrestlers of the highest rank) ever, may try his hand in Mixed Martial Arts for his post-sumo athletic endeavor.

While garnering much success as a rikishi (sumo wrestler), Asashoryu has also been subject to media scrutiny on several occasions for controversial behaviors on and off the dohyo (sumo wrestling ring).

As an athelete in a sport bound by rich tradition and strict code of conduct, he has been criticized numerous times by media and Japan Sumo Association for failing to uphold the standards of behavior expected of a holder of the most prestigious rank in the sport.

He was recently mired in another scandal for allegedly punching an acquaintance after getting drunk on a night out. While an ongoing investigation seeks to uncover the details of the incident, Asashoryu announced his retirement on Thursday, February 4, prompting a huge stir in the media.

In the wake of his retirement announcement, DREAM and Sengoku Raiden Championship have expressed interest in Asashoryu, if he indeed considers transitioning to MMA.

Tomiaki Fukuda, head of Japanese Wrestling Foundation and advisor to SRC, has stated that he is willing to welcome Asashoryu to SRC. Regarding the allegation of assault leveled against Asashoryu in the latest scandal, Fukuda has indicated that the yokozuna's past misdeeds will not constitute a huge impediment to his joining SRC.

Keiichi Sasahara of DREAM, a MMA promotion backed by Fighting and Entertainment Group that has signed former sumo wrestler, Akebono to fight in K-1 and Hero's in the past, also commented that Asashoryu would be an "attractive prospect." Nevertheless, given the lack of precedent of sumo wrestlers' making successful transition to MMA, he gave a rightfully critical assessment that "MMA is a sport in which even Olympic judo gold medalists (i.e. Satoshi Ishii) struggle; it is not for the faint of heart."

Though Asashoryu's becoming a MMA fighter is mere speculation at this point, the prospect of his signing with DREAM or SRC inspires hope for ratings gold in this time of MMA drought in Japan; however, it most likely will turn out to be just another tired attempt to garner temporary boost in interest in MMA among general public, rather than a viable revival plan for the ailing sport.