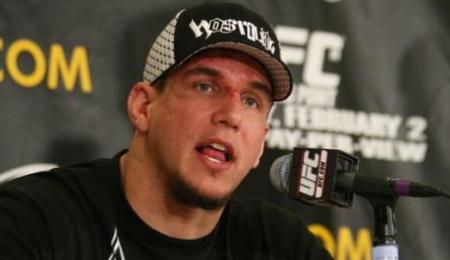 Former UFC heavyweight champion Frank Mir told WXDX radio last week that he wanted division champion Brock Lesnar to be the first mixed martial arts fighter to die from Octagon related injuries. Well, at least that's what goes through his mind when he's in fight mode, according to his statement.

Still, the comments didn't sit well with UFC President Dana White, who told Carmichael Dave’s KHTK radio show in Sacramento that Mir was "a [expletive] idiot" and that he "never heard something so unprofessional and idiotic in his life."

Mir seems to be genuinely obsessed with Brock Lesnar after getting smashed by the pasty-faced goliath at UFC 100 last July. Not that Mir ever needed a reason to talk trash, but his statements have spread like a virus, infecting most major media outlets -- including the ones that beg for a reason to slam the UFC.

After continuing to pick up steam, the UFC has released a statement offering an apology from the Las Vegas fighter:

"I would like to apologize to Brock Lesnar, his family, the UFC and the UFC fans for my stupid remarks. I respect Brock, all the other fighters, and the sport of mixed martial arts.  I’m sorry that I stepped out of line."

And a second lashing from Dana White soon followed:

"I was disappointed by Frank Mir’s comments. Frank’s been with the UFC a long time, he’s a two-time heavyweight champion and a commentator for the WEC.  I think his emotions are running high right now, he has a big fight coming up next month and he’s still upset about his loss to Lesnar.  He’s been talked to, he regrets what he said, and he won’t be saying anything like that again."

Anyone who's been following the fight game for a while knows this is vintage Mir. But regardless of the comments directed towards Lesnar, it's a bit surprising to see him still focus on the champ when he has a colossal test ahead of him in Shane Carwin at UFC 111 next month.

Will "The Engineer" make him pay for it?