Dana White: Herschel Walker in the UFC would be the first death in MMA

Share All sharing options for: Dana White: Herschel Walker in the UFC would be the first death in MMA 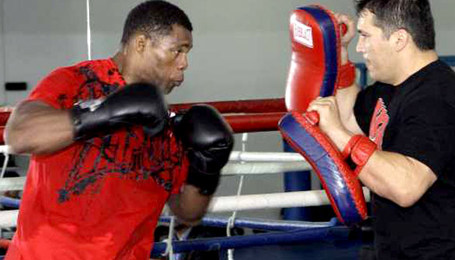 "The whole Herschel Walker thing, listen I give the guy the props, he is almost 50 years old. He is still in great shape and he went out trained in mixed martial arts and he beat a guy who had no athletic ability, no stand up and no ground. You know what makes me crazy is the media attention it got. ESPN will cover Herschel Walker fighting when you got guys like George St. Pierre, Anderson Silva, Brock Lesnar and BJ Penn. All these great athletes that have been training for years and are the best in the sport and you are talking about Herschel Walker? You know what would happen to Herschel Walker over here? It would be the first death in MMA."

UFC President Dana White has a less-than-optimistic view on the chances of former football great Herschel Walker surviving in the UFC heavyweight division. The Heisman Trophy winner made a successful MMA debut for the San Jose-based Strikeforce promotion back on Jan. 30 by stopping "Dangerous" Greg Nagy via third round TKO. Walker doesn't claim to be anything more than an aspiring fighter with a long way to go to be competitive but still gets under the skin of White due to the media exposure he received from ESPN and other major media outlets. Does the UFC boss have a legitimate gripe?