Share All sharing options for: Evan Dunham, if you're listening, keep winning ... 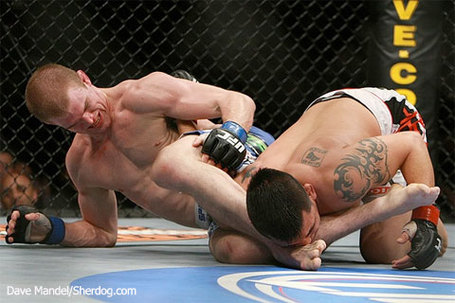 ... because Efrain Escudero is coming after you.

"I performed like crap. He’s a good fighter. He came in and did what he had to do, but I went in there not thinking about the fight. I had a lot of other things on my mind so it kind of hurt me. There was no doubt in my mind that I was going to beat Cole Miller when I fought him, but against Dunham I had a lot of problems going through my head. I’m not taking this win from him, but I just want this rematch. Dunham, if you’re listening, keep winning. I wish you the best, but I’m coming after you."

"Hencho en Mexico" tells Tapology.com that he's on his way back to the UFC after a gruesome armbar submission loss to Evan Dunham at UFC Fight Night 20 last month that saw the Oregon grappler push his undefeated streak to 10 wins. Escudero wants a rematch but must first get through his next opponent, rumored to be Dan Lauzon at UFC 114 in May.