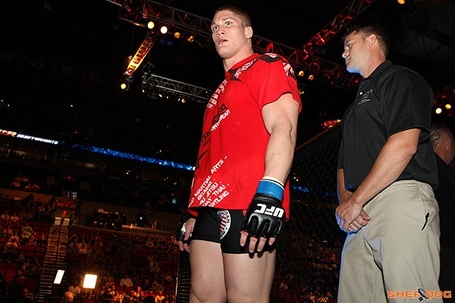 "Well, obviously, I'm extremely disappointed. I feel like I'm a much more talented fighter than I got the chance to show. Not to take anything (away) from Overeem, I think he's an incredible, incredible fighter. I was just disappointed, you know. I wanted to come out and put on a great show, exciting show for the fans but you know obviously I wasn't prepared. You know, I think I trained seven days for this fight and it definitely showed. ... I don't regret it at all. It was a great opportunity to fight in Japan. It's been a dream of mine. I hope that, you know, it maybe opened the door for me to come back here and show that I have a much, much better skill set than what I put on display..."

-- Todd Duffee reflects (via Fight Opinion) on taking a fight against K-1 and Strikeforce Heavyweight Champion Alistair Overeem on just seven days notice at Dynamite!! 2010 on Dec. 31. The UFC castoff had hoped to make a name for himself against such a high profile opponent. "The Reem" did what he does best though and "Demolished" the Duffman in just under twenty seconds. Duffee isn't discouraged however, and he even hopes his performance against "Ubereem" earned him another shot in Japan. Is he out of his mind for thinking so? Don't hold back, Maniacs.