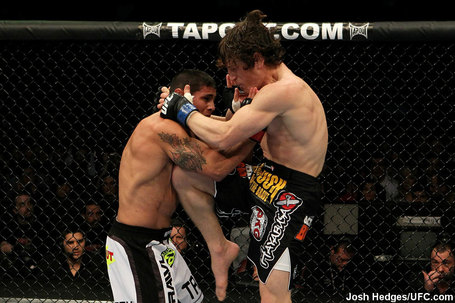 "There's definitely work ahead to be done. I need to improve. I need to continue to improve and become a better fighter, and, I've already started, but keep learning. When you stop learning, when you stop being a student of the game and you stop learning your craft, that's when things fall apart. That's something that I've never really talked about before. That sort of happened to me. I always know what's up and I know where I stand skill-wise and technique-wise, but I think just stress and pressure and complacency kind of took over."

-- The Ultimate Fighter (TUF) season 6 winner Mac Danzig tells MMAweekly.com that he's finally put away his personal issues and is back to being a student of the game. Danzig recently found himself fighting for his job, reeling from a three fight-losing streak. He redeemed himself with a unanimous decision win over Justin Buchholz at UFC 109. He had a brief -- albeit controversial setback -- when he was "submitted" by Matt Wiman at UFC 115, even though he never tapped (the referee stopped it prematurely). Meanwhile, there was no controversy at UFC 124 as Danzig earned a stunning first round knockout victory over Joe Stevenson. Is Danzig now suddenly a serious threat in the 155-pound division or was the victory just a fluke?