Share All sharing options for: Carlos Condit feels like he's ready for a title shot -- after another win or two 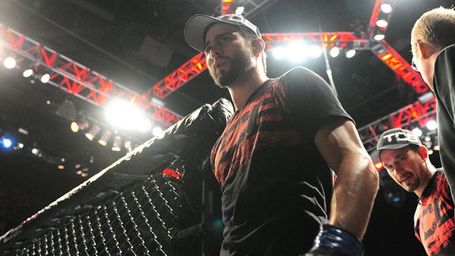 "I think I'm coming to that point. I feel like I'm ready. I've got to put the wins together to get my place, and I think in one or two wins I should be there. I think no matter who I step in against there's always doubt, there's always the opportunity for them to knock you out cold and embarrass you, but you've just got to put that aside and put your best foot forward and go out there and fight your best fight no matter who it is."

Former WEC Welterweight Champion Carlos Condit thinks he's ready to put another notch under his belt -- the UFC's 170-pound title. The good news? He doesn't mind going through fellow Greg Jackson teammate Georges St. Pierre to get it. Coming off a thunderous left-hook knockout of British standout Dan Hardy, Condit has been matched up with Chris Lytle, who's in the midst of the strongest run of his career, at UFC 127 in Australia. Can the former firefighter turn the "Lights Out" on Condit's title aspirations? Or is "The Natural Born Killer" really the guy to finally bring an end to GSP's reign at the top?