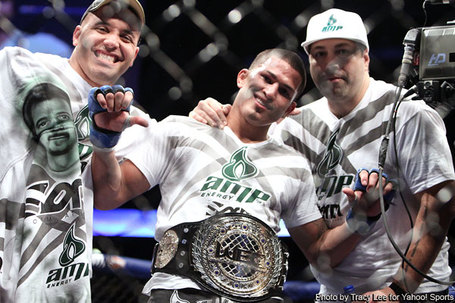 The very last fight to ever take place under the World Extreme Cagefighting banner was nothing less than spectacular.

For five whole rounds, Ben Henderson and Anthony Pettis went to war for the WEC lightweight title and to determine the number one contender for the UFC lightweight championship.

It truly was "Showtime," folks.

Anthony Pettis took a decision victory to become the WEC lightweight champion in a thrilling fight for the world's most exciting organization.

It was a "razor close fight" as color commentator Stephan Bonnar referred to it. In the fifth and final frame, Pettis landed the most exciting head kick in the history of MMA.

In fact, this may have truly been the "Fight of the Year."

Ben Henderson was unhappy with the decision being awarded to his opponent but there was little doubt "Showtime" won the fight after the final round.

Throughout the fight, "Bendo" was landing takedowns but it seemed as if each time he did, Pettis would reverse him and take his back.

He never could get the submission but it scored him enough points to give him two of the first four rounds.

Not to be outdone, Henderson nearly choked out the MTV reality star with a rear naked choke in the third. Pettis, determined and unwilling to break, managed to get out once again and head to a fifth and deciding round.

The fourth round may have saw the most action but what happened in the fifth will never be forgotten.

Towards the end of the round, in what was still close enough to get nervous about for either fighter, Pettis charged forward with Henderson backing away. Instead of going straight at him, he used the cage to push off and landed the most amazing head kick in the history of the WEC.

"Bendo" immediately dropped and looked like he was out. He recovered but in the end, it didn't matter as Pettis was awarded the decision.

It was an instant classic and a fitting end to one of, if not thee most exciting fight promotion's in the young history of MMA.

We will miss you, World Extreme Cagefighting.