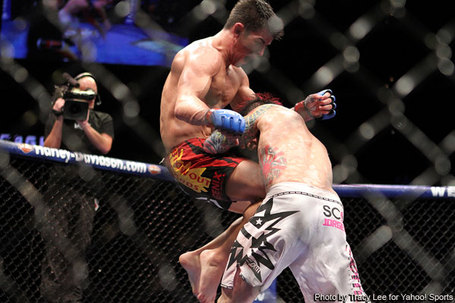 In a five-round slugfest, typical of the lighter weight classes and part of what made the WEC so famous throughout it's 10 year run, Dominick Cruz jabbed and jived his way to a unanimous decision win over Scott Jorgensen to become the inaugural UFC bantamweight champion.

All three judges scored the bout 50-45 in favor of the "Dominator."

It's a fitting nickname for the 135-pound wrecking machine. And while Jorgensen was game and a very tough opponent, he simply could not match the pace cut by Cruz.

The opening round set the tone for what would be a long evening for the challenger. Using angles along with superior head movement, the champion frustrated "Young Guns" by scoring points with punches before moving away from danger.

He would showcase a well-rounded game throughout the rest of the fight.

If there was any doubt who would have the wrestling edge, Cruz put that to rest in round two. He came out and earned a takedown and worked from top to put himself up 20-18 on the scorecards.

The third frame saw the first knockdown of the fight with the "Dominator" landing a hard straight right hand that stunned Jorgensen. He immediately popped back to his feet but the message was clear.

Nothing was going to come easy.

If there was any doubt of the first three rounds, Cruz used superior takedowns and control to win the fourth and force "Young Guns" to go for broke in the fifth.

Too little too late.

By the time the horn sounded, there was no doubt who the winner would be. The Arizona native, just 25 years of age, was elated to be the first man to have the UFC bantamweight title wrapped around his waist.

Is it time for Urijah Faber?