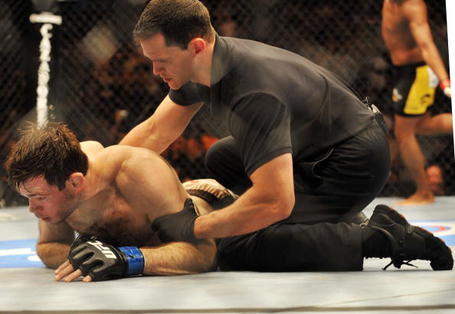 The date was August 8, 2009. The venue was the Wachovia Center in Philadelphia, Pennsylvania. The event was UFC 101: "Declaration" and it featured a co-main event of Middleweight Champion Anderson Silva vs. former Light-Heavyweight Champion Forrest Griffin.

It was an absolute destruction.

The "Spider" laid waste to any claim Griffin had as a top pound-for-pound fighter. The win was so convincing, so devastating and soul-destroying, so embarrassing, that Griffin skipped the post-fight interview in favor of running out of the cage and taking an extended hiatus from the media and fans.

Once he returned, he made light of the fight and his Forrest Gump impression afterward. But it was also understood that some questions were off limits -- or at least it was known to ask at your own peril.

Even over a year later, it's still a sensitive subject for the pasty brawler. One need look no further than the interview he recently did with Othello Bouchareb of Mixed Martial Barts to see evidence of that.

When asked what he would do differently in a fight with Silva, Griffin had some choice words and things got uncomfortable to say the least. Transcript of the exchange after the jump.

OB - One semi recent fight I wanted to ask you about was Anderson Silva. I mean clearly the guy is an amazing fighter, one of the best in the world. If you were scheduled to fight him again, how would you prepare and what would you do that you didn't do last time?

FG - What you're gonna read. Applied directly to you. You're going to read page 32 of my book.

OB - Oh okay. Does it say something negative about me?

FG - Oh yes. It's going to explain everything perfectly.

OB - I mean, it's a recent fight. I think it's fair to ask you about that.

OB - Alright, so you want me to stay away from any talk of Anderson Silva.

OB - I just wanted to see how you would prepare for it and what would you change if you were to fight him again that you didn't do last time?

FG - Uh, I would probably poison him beforehand with some sort of drug that would make him slower.

OB - One last question before I let you go. I was actually at that fight, at UFC 101 in Philly. I was a little upset because one of the things I look forward to when you fight are your post fight interviews because they're..you're very candid and pretty funny. How come you didn't stick around for that this time?

FG - Let me tell you what, me and you are never gonna be friends. Don't ever...don't...don't friend me, alright?

For those that may not know, page 32 of his latest book, Be Ready When the Sh*t Goes Down: A Survival Guide to the Apocalypse, features an illustration of Forrest brandishing a gun and demonstrating an Old West Quick Draw technique that he likes "to practice in abandoned warehouses on unsuspecting vermin..."

Griffin is set to do battle with former Anderson Silva nemesis Rich Franklin at UFC 126 on Feb. 5 in Las Vegas, Nevada.