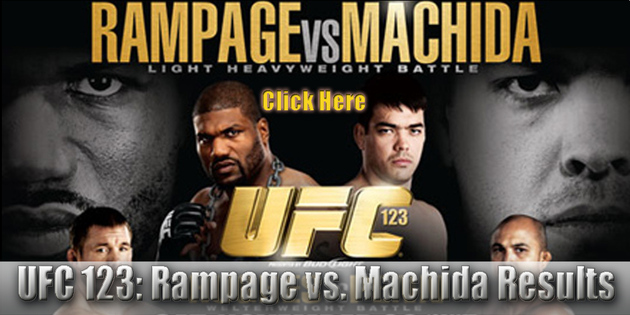 Ultimate Fighting Championship (UFC) is finally set to boogie-down in "Motown" with its latest pay-per-view (PPV) fight card, which is set to go off TONIGHT (Sat., Nov. 20, 2010) from the Palace of Auburn Hills in the suburbs of Detroit, Michigan.

UFC 123: "Rampage vs. Machida" will be headlined by a light heavyweight match up of top contenders and former 205-pound title holders Quinton "Rampage" Jackson and Lyoto "The Dragon" Machida. And two guys you've probably never heard of, Matt Hughes and BJ "The Prodigy" Penn, will finally complete their welterweight trilogy.

MMAmania.com will provide LIVE blow-by-blow, round-by-round coverage of UFC 123, beginning with the Spike TV broadcast at 9 p.m. ET. We'll then roll right into the PPV telecast at 10 p.m. ET. Up-to-the-minute quick results of all the other under card action will begin to flow around 8 p.m. ET.

Many of our readers check-in before, during and after the televised action to share their thoughts on all the exciting action. Therefore, feel free to leave a comment or 123 before you leave and chat with all the other Maniacs during the show -- it always turns out to be a great discussion.

Keep in mind that we will also be the spot for the latest news, recaps and post-fight analysis after "Rampage vs. Machida."

Under card (May not be broadcast):

Round three: Rampage again moving forward. Leg kick from Rampage. Leg kick from Machida. Rampage misses with a good combo. Leg kick from Rampage. Rampage misses with a left/right hook combo. Rampage gets caught with a big shot then a combo! Head kick from Machida!! Machida with a knee! Now Rampage explodes with a huge combo of his own!!!!! Machida now gets a take down!!! Machida in half guard. Machida not looking to pass. Now Machida is trying to pass to full mount. Rampage looking to stall. Machida looking for a kimura. Machida now into side control. Rampage preying for a stand up. Machida to full mount!! Machida now going for an arm bar!!! Rampage goes for a slam and Machida just lets go and their both on their feet. Machida goes right for the tie up. Machida gets the back now, Rampage winds up on top from the scramble!! Thats the bell, exciting end to that fight. This is going to be a tough fight to score. Machida had Rampage hurt but then Rampage burst out with a flurry of his own that saved him from being KO'd. Machida won this round but i think Rampage won the fight. 10-9 Machida.

Round one: BJ comes out with a good right left combo. Body kick from Hughes is caught and Penn lands a counter left. BJ comes forward with a with HUGE right hook that drops Hughes!!! BJ starts dropping BOMBS and thats it Hughes is out!!! BJ WINS BY KO. WOW THAT WAS INSANE!!

Round two: High kick from Davis nothing there. Jab from Boetsch. Davis muscles his way into double underhooks. Their against the cage now. Crowd booing why I dont know. So far though this round is uneventful. Davis working hard for double legs. Boetsch goes for a guillotine! Davis slips out. Now Davis in half guard. Davis looking for a kimura. Davis is cranking it hard with one arm. Davis is powering it through and Boetsch is looking like he is ready to tap. Boetsch taps out from a one armed kimura!! Wow never have seen someone successfully win with a one handed kimura submission. Great showing from Davis.

Round one: Both men just feeling out their distance no strikes thrown in 1st minute. Jab from Harris. Jab from Harris again. Sharp quick jab from Harris. He has a lighting quick jab. Crowd booing big time. Falcao hasnt thrown one strike yet. Jab from Harris seems to be the only point scoring going on as of now. Body kick from Falcao and he is finally on the board 3 minutes in. Jab from Harris. Right hook from Harris. Falcao comes in and throws a HUGE flurry on power shots. Big knee to the chest. Now Falcao on top and is throwing some serious BOMBS. WOW out of no where!!! Falcao still throwing big shots. Harris desperately trying to get to the feet. Harris looking to hold on. Falcao now has a choke locked in. Harris with a BIG back ward slam!!! Falcao has a rear naked choke DEEEP still after the slam but the bell rings!!! Wow Harris saved by the bell and Falcao won the round with only 2 minutes of offense but it was impressive. 10-9 Falcao.

Round two: BIG right from Falcao right off the bat. Harris pops up with a BIG right of his own. Falcao counters with a flurry and is on top now. Falcao has the back now. Harris is looking to escape. Falcao has the back and both hooks looking for the choke again. Falcao has picked up right where he left off. Falcao with big shots to open up Harris. Harris turns it around and is now holding onto a double. Falcao gets double under hooks and is throwing some knees to the stomach against the cage. Jab from Harris. Harris drops down for a single but Falcao sprawls on it. Harris holding on tight. Harris holding onto a high single. Harris with a big slam take down and Falcao right back up. Harris landing a good knee on the way up. Body kick from Falcao. HUGE head kick from Falcao. Harris goes right for a double and Falcao sprawls out. Harris is breathing heavy and he has taken some serious damage not to mention basically being choked up but saved by the bell. Harris desperately holding onto the single and is trying to avoid anymore damage, but he cannot seem to mount any offense. Back to the feet. Thats the bell, and another round dominated by Falcao. Harris is gutting it out but he is beaten up and gassed. 10-9 Falcao.

Round one: Sharp leg kick from Brown. Brown misses a head kick. Foster dives in and gets a take down. Good elbow from Foster. Brown up to his feet. Nice right from Foster, flying knee attempt from Foster and Brown gets a take down. Brown in north-south position. Side control now for Brown. Foster sneaks out the back door and now has Browns back and he lands some good punches. Brown on top now again and has the back now that he avoids an arm bar attempt. Foster back to his feet and they both exchange knees. Good right from Foster and another good right from Foster then a take down. Brown trying to scramble. Foster on top in half guard. Brown reverses position and mounts! Foster gets out but Brown has the back now. Brown gets shook off the back but now he has an arm bar in and its close!! Foster patient and gets out of it. Foster on top. Foster posturing. Good elbows from the bottom from Brown. Thats the end of the round and it was close overall. Id lean for Foster due to the take downs, but Brown has done his fair share of damage. 10-9 Foster.

Round one: Nice right to the body from Simpson. Leg kick and right hook combo from Simpson. Nice right from Simpson. Big right from Munoz. Nice left hook from Munoz. Munoz pushing Simpson against the cage and working in knee's to the thigh. Simpson reverses position and lands a solid knee. Nice left hook from Munoz. Munoz with a weak shot and Simpson sprawls out and transitions to the back. Munoz is out and their standing again. Leg kick from Munoz. Another kick from Munoz left hook counter for Simpson. Take down from Simpson and Simpson is on the back and Munoz slips out. Wild exchange and both men land some blows. Munoz nice elbow uppercut and knee combo. Another big uppercut wobbles Simpson!! Simpson ties up Munoz now against the cage trying to regain his bearings. Munoz turns it around. Simpson almost lands a hip toss, now has Munoz with his back on the cage. Nice knee from Simpson, Munoz goes for a big high kick but nothing doing. Leg kick from Munoz. Thats the bell and that was a close close round. It could go either way. Id lean 10-9 Munoz.

Round two: Great hook to body from Simpson. Body kick from Simpson. Munoz with a body kick, Simpson catches it and puts him on the mat. Munoz back up to his feet and lands a hard back fist. Munoz now lands some good rights and lefts and he has Simpson hurt!! Simpson lands a good counter. Munoz with a take down. Munoz on the back and Simpson to his feet. Low blow from Simpson stops the fight for a second. Munoz bleeding from his forehead. Nice leg kick from Munoz. Munoz another kick but he is very obvious with it. Nice high kick from Munoz. Munoz with another body kick and Simpson keeps catching it but cant do anything with it. Munoz lands a SICK head kick that snaps the head of Simpson back!!! I dont know how he is still standing, now Simpson with a take down!!! The ref stands them up. The crowd actually boo's!! Bad stand up from the ref. Now Munoz lands a low blow of his own. Munoz's cut is from both guys heads colliding. Simpson with a take down again. Munoz with a good right while getting back to his feet. Front kick from Simpson. Good right from Munoz. Another good right from Munoz. Munoz pushing Simpson against the cage and landing some knees to the thigh. That's the bell, and that was another really close close round. Simpson could have stole that one with the take downs, but Munoz is landing all the power shots and causing much more damage. 10-9 Simpson.

Round three: Nice leg kick again from Munoz and Simpson catches it and brings him down. Munoz transitions to the back and lands some HUGE punches!! Simpson to his feet and gets caught with a great left hook from Munoz! The ref stops it due to Simpson saying he got caught with a finger poke but it was a straight punch. They start up again and Simpson is wobbly. Munoz has him against the cage and is landing some good knee's. Nice left from Simpson. Good leg kick from Munoz. Nice right from Munoz. Their against the cage and Munoz is landing good knees and punches. Munoz is taking control of this fight now. Simpson reverses positions, but only briefly. Munoz lands a sick combo on the break. Simpson goes for a take down. Nothing there. Left from Simpson. Leg kick from Munoz. Knee to the body from Simpson. Leg kick from Munoz. Uppercut from Simpson. Nice knee to the body from Munoz. Simpson with a high single and gets a take down. Munoz now grabs a single and gets to his feet. Both men landing some huge punches now!! Uppercut from Simpson wild left hook from Munoz and both men land!! Their tied up now. Munoz with a knee to the body. Munoz now throwing wild BOMBS to finish the round!!! Thats the bell and wow that was a great fight. Both men fought hard and it was close throughout but Munoz landing some serious power shots and that should win him this fight. 10-9 Munoz.