Gabriel Gonzaga released by the UFC

Share All sharing options for: Gabriel Gonzaga released by the UFC 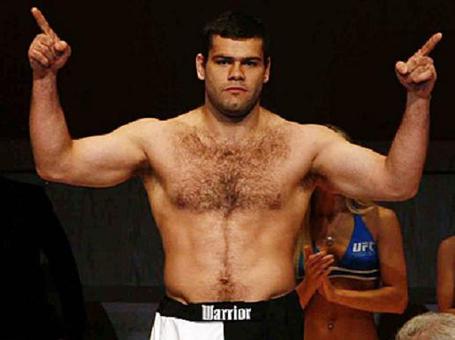 Former number one heavyweight contender, Gabriel Gonzaga, has been released from his UFC contract after being defeated for the third time in his last four bouts, a unanimous decision loss to Brendan Schaub at UFC 121: "Lesnar vs. Velasquez" on Oct. 23 in Anaheim, California.

"Napao" passed along the unfortunate news via his official twitter page.
Gonzaga made his Octagon debut at UFC 56 back in November 2005 when he knocked out Kevin Jordan. The Brazilian went on to win two more fights before viciously knocking out Mirko "Cro Cop" Filipovic with a head kick, one that earned him a shot at then UFC heavyweight champion Randy Couture at UFC 74.
The title match-up didn't go Gonzaga's way
The BJJ black belt was not able to answer Couture's onslaught of attacks and the fight was finished in the third round. It was the first and only title shot "Napao" would receive.
Gonzaga would return to action at UFC 80, only to be stopped again, this time getting finished by Fabricio Werdum when he couldn't answer "Vai Cavalo's" punches.
Wins over Justin McCully and Josh Hendricks were much needed for Gonzaga, but he would once again find himself on the losing end when Shane Carwin knocked him senseless with one punch at UFC 96.
Many wondered if "Napao" would go back to his BJJ roots after three disappointing losses, but fans soon found out that Gonzaga was still devoted to his stand-up. With a KO loss to Junior dos Santos and a unanimous decision loss to "The Hybrid," Gonzaga finds himself looking for work.
One has to think Gonzaga won't be out of a job for long. The question is, who will pick him up? Strikeforce? Bellator? Does he even want to compete?

What do you think about the UFC's latest roster cut?