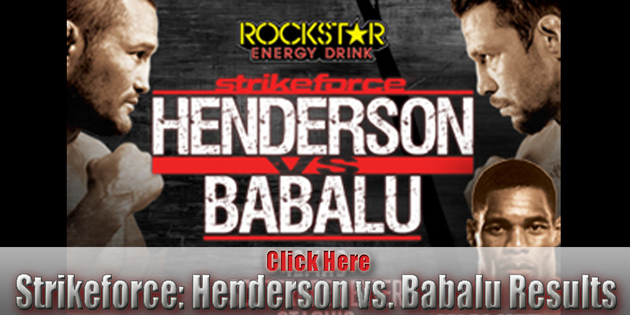 Strikeforce is all set for tonight's (Dec. 4) mixed martial arts offering on Showtime from the Scottrade Center in St. Louis, Missouri. "Henderson vs. Babalu" is set to air live on the premium cable channel at 10 p.m. ET.

The night's main event will feature a light heavyweight rematch between longtime veterans of the sport, Dan Henderson and Renato Sobral. "Hendo" defeated "Babalu" via majority decision under the RINGS banner way back in 2000.

Also strapping on the gloves will be Scott Smith, as "Hands of Steel" makes his welterweight debut against hard-hitting British banger Paul "Semtex" Daley.

Many of our readers check-in before, during and after the Showtime telecast to share their thoughts on the action. Therefore, feel free to leave a comment (or 10) before you leave and chat with all the other Maniacs during the show -- it always turns out to be a great discussion.

Round one: Babalu circling right. He lands a right hand and then eats a hard one from Henderson. Henderson looks to be trying to set up that right hand. He blocks a high kick from Sobral. Now he takes a leg kick. Straight kick misses from Babalu. More kicks from the Brazilian. Henderson fires that right hand and misses. Now a left connects. Another lunging right hand from Henderson. This one lands and Babalu drops down and tries for a takedown. Henderson lands on top and unloads some ground strikes. Babalu has half guard. Henderson stands and drops three unanswered bombs to Babalu's face! He's out! Dan Henderson by knockout via ground and pound! Great finish. Three in a row.

Final result: Dan Henderson defeats Renato "Babalu" Sobral via knockout (strikes) at 1:53 of round one

Round one: Punches right off the bat in the center of the cage. Daley fires a kick now. Smith times a nice straight left. Jabs from Smith. Hard leg kick from Daley. High kick now gets blocked. Jabs from Smith. Hard two punch combo from Daley floors Smith! He wants the finish, but Smith is back on his feet. He looks to be okay. He's still firing jabs. Daley stalking him. Nice left from Daley. Jabs from Daley now. Nice right hand lands for Daley. Another stiff left hand buckles Smith. He's still standing, but Daley is all over him. Another left hook on the button! Smith is out before he hits the mat. Holy shit! Back to back big time finishes. This one might have been nicer than Lawler's.

Final result: Paul Daley defeats Scott Smith via knockout (strikes) at 2:09 of round one

Round one: Lindland takes the center. Lawler lands a right. Leg kick from Lindland. Exchange in the center. Lindland is standing in there. Nice left hand connects for Lawler. Another exchange with more kicks from Lindland. Lawler times a hard left hook. Now he connects with another stiff two punch combination. This time it sends Lindland to the canvas, and he's not getting up. He's out cold! Wow! Lawler was timing that the whole time and Lindland walked right into it. Beautiful finish from Lawler.

Final result: Robbie Lawler defeats Matt Lindland via knockout (punches) at 0:50 of round one

Round one: Kyle circling, showing his jab. Now he leans in for a right, and Bigfoot makes him pay with a nice counter punch. Now Kyle connects with a huge right hand of his own that floors Silva! Wow! He's landing big hammerfists now. Silva trying to defend, but Kyle is all over him. Silva somehow manages to get his guard back, but Kyle is still throwing bombs over the top of him. Big hammerfists from Kyle! Silva trying to hold on with half guard. Kyle is slowing down, but he still has a good position here, and he continues to land punches. Palm punches from Kyle now. Silva tries to sweep, but Kyle stuffs it and keeps the top position. More hammerfists from Kyle. Silva gets full guard and he closes it up. Kyle still punching away. Silva now firing back from the bottom. Kyle with some good body shots now. More hard shots to the body from Kyle. He's dominated this round. Another nice left hand just before the bell.

Round two: Silva shoots right away. Kyle side steps it. Now Silva lands with a big right hand. Jab from Kyle. Leg kick from Silva. Kyle circling. Now Silva grabs him and wrestles him to the mat. Kyle has half guard. Silva stands over him and fires some heavy punches. He takes side control. Now to north south. Big punches from Silva. He puts his knee on Kyle's belly. Kyle tries to escape back to his feet. Now Silva locks in an anaconda choke. It looks deep. Kyle somehow escapes! Very nice. Silva standing over him. He quickly takes full mount and unloads with big punches. The referee has seen enough and Bigfoot is the winner. Good fight.

Round one: Gloves touch and we're underway with the first fight of the Showtime televised card. St. Preux keeping his distance. Radach circling left and right. Straight left then a low kick from St. Preux. Radach trying to close the distance and he does, pinning St. Preux against the fence. He scoops St. Pruex and dumps him on his back. St. Preux working hard to get back to his feet. He gets there. Radach still latched onto him against the fence. Knees from Radach. St. Preux gets separation and tees off with a combination. Radach makes him pay with a huge counter right hand. St. Preux eats it. Radach cirlces out. High kick from St. Preux. Radach shoots. St. Preux stuffs it and now he takes Radach's back. He's landing punches to the side of Radach's head. Now he's trying to flatten him out. He does it and unloads with several unanswered strikes to Radach's head. Radach is holding on and blocking the punches with his hands, but he's not doing much else. St. Preux still teeing off. St. Preux looking for the choke now. He can't get it. More punches from St. Preux. Now back to the choke. Now some big bombs from St. Preux. Radach has taken a ton of punishment, but the referee is letting it continue. The bell sounds. Big round for St. Preux.

Round two: St. Preux drops Radach right off the bat with punches. Radach turtles up and St. Preux takes his back and goes back to firing away with punches. He tries a choke. Radach defends. He ends up in the north south position momentarily before St. Preux takes his back again. More punches to Radach's head and body. Radach has no answer and he's not doing much. St. Preux isn't doing much right now either, and he may be tired at this point. He still has the dominant position, though, and Radach can't get out of it. Now the referee warns Radach to start doing something. St. Preux still landing punches to the body and head. Radach gets full guard now. St. Preux looking to pass against the fence. Both fighters look gassed. Radach gives up his back again and St. Preux goes back to work with punches. Radach works to a north south now. St. Preux powers back to his feet and lands on Radach's back again. More punches before the bell. Another clear round for St. Pruex.

Round three: Radach takes the center and lunges forward with punches. Into the clinch. Now Radach backs up and tees off with a combination. St. Preux covering up. Radach still firing. St. Preux connects with a counter that sends Radach to the floor! St. Preux takes his back right away. Here we go again. Punches from St. Preux. Radach continues to block them with his hands. St. Preux mixing in body strikes. The crowd raining down the boos now. The referee wants a stand up. High kick from St. Preux gets blocked. Nice four punch combination from Radach before a takedown try. St. Preux defending against the fence. Radach hanging on for the single. Another seperation from the referee. Radach with a big right and then another single attempt. St. Preux stuffs it again against the cage. Elbows from St. Preux. Another separation from the ref. Big punches from both men. Radach falls into another takedown attempt against the fence. Now he explodes and finally gets the takedown. St. Preux with full guard. Radach with some ground and pound before the final bell sounds. St. Preux is going to take this decision.