Share All sharing options for: Bellator 32 results from Oct. 14 in Kansas City 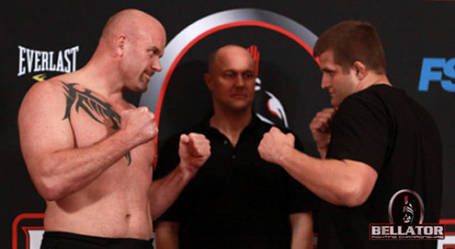 Of course much of the hoopla surrounding the return to "Cowtown" came from the championship title fight between Cole Konrad and Neil Grove. The two heavyweights went to war in the night's main event but it would be "The Polar Bear" who would claim the strap with a surprising first round submission (keylock).

Also getting their hands on some gold was bantamweight Zack Makovsky. The "Fun Size" Philly fighter outlasted Ed "Wild" West en route to a unanimous decision victory, improving to 12-2 and giving West his first loss in eight appearances.

Complete Bellator 32 results after the jump.

For round-by-round coverage and fight recaps of Bellator 32 click here.