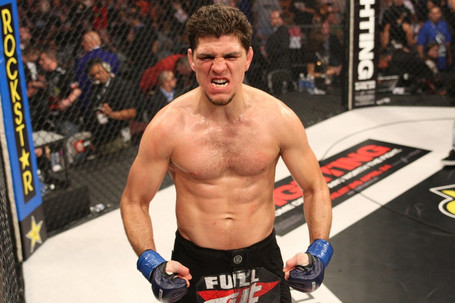 You know how people used to think Albert Einstein was a crazy dude, but then long after he died we realized he was a genius? Well, maybe that's what we have in Nick Diaz. A man respected for his craft, yet someone who doesn't seem to fully understand his surroundings.

A man, who despite possessing the ability to be great at what he does, consistently makes decisions that for all intents and purposes harm his very well being. Sure, some of what he says and does makes very little to sense to us. But is that because Mr. Diaz is well ahead of his time?

Diaz tells Ariel Helwani that there are certain topics we shouldn't touch with him. Like the word - excited."I don't really use that word," he said. "I think I had this discussion earlier. I have a lot of energy, so I feel good."

And as to whether or not Nick has a dream fight, he had to think about for a minute, but then had a pretty sweet idea. I think he means fighting both of them at once. "Um... no. Actually, right now, I'd like to fight both GSP and Anderson Silva because I think I could beat them," declared the defiant welterweight. "But they [UFC] won't ever let that happen."

When asked about how he envisioned the fight with Zaromskis ending, Diaz seemed to surprise himself with his answer:

Diaz also shared some interesting thoughts on how he thinks fights should be judged. Imagine if NFL games were determined in this fashion. I would argue that the New York Giants went undefeated every season of their existence. "It's about who would have won the fight had the fight kept going," he reasons. "Not who was winning, but who would have won."

Despite owning a 6-4 record inside the Octagon, Diaz feels as though his record should read as 9-1. "I don't feel like I won the fight against Diego Sanchez," he concedes. "But other than that, I didn't lose any other fights in the UFC."

To fully appreciate what could be a defining moment of Nick Diaz's legacy check out the full interview below.