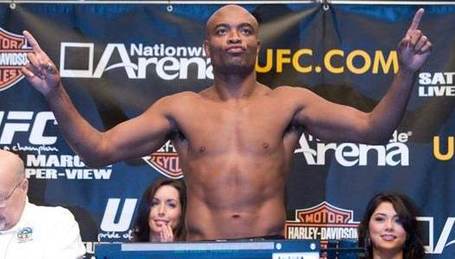 UFC middleweight contender, Chael Sonnen is not one to mince his words, however vitriolic they may be.

With his impending clash against another top contender, Nate Marquardt, at UFC 109, the Team Quest member may be just one bout removed from a shot at the title currently under siege by Anderson Silva. While hoping for a title shot if he bests Marquardt, Sonnen does not have particularly high regard for the current UFC middleweight champion. In fact, he unleashed some choice words for Silva and his manager, Ed Soares during his recent appearance on MMAWeekly Radio.

Apparently, nobody likes to watch Anderson Silva, who has a dirty little secret:

"I would imagine, who knows what Anderson's doing. At the end of the day, who cares. If he wants to leave the division, leave the sport, who cares. Beat it, nobody tunes in to watch him anyways, and his little fake 'I don't speak English. You want me to let you in on a secret, Anderson Silva speaks perfect English. He just has such a low amount of respect for you and all the rest of the media that he pretends he doesn't. I've had conversations with Anderson Silva in perfect English, and on top of that he's so boring to listen to that he and his rocket scientist manager, Ed Soares, who is also about as exciting as watching grass grow, have decided that Ed is better on the mic than Anderson, so just let Ed do the talking.""

And what is so great about Silva?

"It's quite ironic that all the media comes on and talks about how great this guy is for reasons that are completely un-understandable to me. How great Anderson Silva is, and all of us fighters are in the back going, 'jeez, they're out there massaging his ego, Anderson hates them so much, he pretends he can't understand them. That guy's no more the top fighter out there than Bigfoot is roaming the woods. That is an absolute myth, and all these guys can buy into it, but there's a young man out in Portland, Ore., that is not signing up on that bandwagon. If Anderson ever signed to fight me, which is highly unlikely, he'll be getting a verbal beating like you've never seen. And his language barrier won't be the point of interest."

Silva's manager, Ed Soares, also spoke to MMAWeekly to provide his retort to Sonnen's remarks. He prefaced his statement with a compliment for Sonnen, but also thinks he's struggling for air time.:

"I think no one will really pay attention to what he has to say unless he probably talks about Anderson. I don't think people pay too much attention to what Chael does. Saying that Anderson's boring or Anderson's this, Anderson's that, we don't even need to go back and see what Chael has done. If you really want to analyze Chael's career over the past couple years, he's had some wins, but he said he didn't tap against Paulo Filho. If the ref wouldn’t have stopped the fight, Paulo Filho would have his arm in Brazil with him. And when he beat Paulo Filho, he was 35 to 40 percent of a Paulo Filho and he took him to a decision. Then he went and fought Damien Maia, got submitted quick, and now he's going to fight Nate Marquardt which Nate just ended up knocking out Damien Maia. I think Chael should be really focused on his fight that he's got against Nate Marquardt because I can tell you right now that's probably going to be the hardest fight of his life. I would put my money on Nate."

Anyone think Sonnen is talking his way into an eventual "Spider" fight?