UFC 110 results and LIVE fight coverage for 'Nogueira vs Velasquez' on Feb. 20 in Australia

Share All sharing options for: UFC 110 results and LIVE fight coverage for 'Nogueira vs Velasquez' on Feb. 20 in Australia 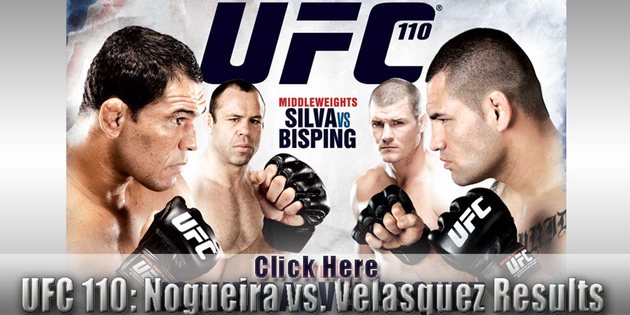 Ultimate Fighting Championship (UFC) is set to pull the trigger on its first-ever pay-per-view (PPV) event "Down Under," which will all go down at the Acer Arena in Sydney, Australia, TONIGHT (Feb. 21, 2010)!

UFC 110: "Nogueira vs. Velasquez" pits Antonio Rodrigo Nogueira against Cain Velasquez in a bout that could determine the next heavyweight number one contender. In the co-main event, Wanderlei "The Axe Murderer" Silva will try to put The Ultimate Fighter (TUF) winner/coach, Michael Bisping, down for "The Count."

MMAmania.com will provide LIVE blow-by-blow, round-by-round coverage of UFC 110, beginning with the PPV broadcast at 10 p.m. ET. In addition, we'll deliver up-to-the-minute quick results of all the other under card action earlier in the evening around 8 p.m. ET.

Many of our readers check-in before, during and after the televised action to share their thoughts on all the exciting action. Therefore, feel free to leave a comment or 110 before you leave and chat with all the other Maniacs during the show -- it always turns out to be a great discussion.

Keep in mind that we will also be the spot for the latest news, recaps and post-fight analysis after "Nogueira vs. Velasquez."

UFC 110 PLAY-BY-PLAY LIVE MAIN CARD COMMENTARY:
Druby here for a huge card down under. We have some amazing matches which should keep us on the edge of our seats so sit back relax and enjoy the mayhem Maniacs.

Round one: Jardine swings big early with a right. Snap left hook from Bader lands. He pushes Jardine against the cage. Nice right hook from Bader. Both men lands rights at the same time. Small cut on the top of the head of Jardine. Bader pushing forward. Nice right again from Bader over the top. Bader ducks under and gets a big take down. Half guard for Jardine. Nice left from Bader. Jardine with Butterfly guard, but Bader transitions right back into half guard. Elbows  to the thigh from Bader. Nice short elbows from the top by Bader. Nice sharp elbow from Bader. Jardine back to butterfly guard and Josh Rosenthal stands them up. Nice right from Jardine. Good right from Bader. Leg kick from Jardine to close it out. That round was all Ryan Bader he looks good tonight, 10-9 Bader.

Round three: Right from Bader barely connects. Bader charges in for the take down but Jardine stuffs it. Bader checks a kick. Bader with a right. Nice leg kick from Jardine is checked again. Nice left body kick from Jardine. Bader with a brief take down. Bader looking tired now. Nice right from Bader wobbles Jardine, then he charges in lands a flying kne and knocks Jardine into the cage!! Bader swings a lands a big left and thats it!!! Ryan Bader with a big knockout win!!! Wow it came out of no where.

Round one: Cro Cop stalking right off the bat. Mirko goes for a head kick early but misses. Perosh goes for a double. Mirko stuffs it and is landing some tough hammer fists. Cro Cop sprawls all the way out now and their back at distance. Leg kick by Perosh lands hard. Cro Cop lands a hard straight left. Perosh goes for a take down and Mirko lands another good left. Perosh back to his feet and now is working the body clinch against the cage. Cro Cop looking to land a big left. Perosh is bleeding from the nose. Another good left from Cro Cop. Perosh goes for a take down again but Mirko is stuffing it easily. NIce left hook from Mirko. Sharp body kick from the Croatian. Straight left from Cro Cop again and then a good sprawl defense. Great body shots from Mirko. Thats the bell, good round for Mirko he looks in good shape and is showing great take down defense. 10-9 Cro Cop.

Round two: Short uppercut from Mirko. Perosh shoots and Mirko sprawls out again. Mirko with some good body shots. Another good uppercut from Mirko and another. Big body kick from Cro Cop. Perosh with two inside leg kicks. Perosh shoots and Mirko again sprawls out. Mirko with some serious punches from the north south top position. Perosh tries again for a shot and cannot finish it. Perosh shoots and another good sprawl from Mirko, but this round is lacking much action. Good punches from Mirko in the sprawl position. BIG left elbow from Cro Cop and Perosh is GUSHING blood. The fight is stopped for a Doctor to check this thing out. Perosh says he will keep going and the crowd loves it. Inside leg kick from Perosh. Big right hook from Mirko. Now Mirko is throwing some big right while their on the ground. Another big left elbow from Cro Cop and thats the bell. Perosh survives but he has a vicious gash in his face. 10-9 Cro Cop. Wait the ref's stop it during the stoppage, they say Perosh can't go on and Mirko Cro Cop will come away with an impressive victory albeit against a last minute fill in opponent.