Share All sharing options for: MMA Quick Quote: Brett Rogers gets advice from, and trains with, Josh Barnett for Fedor Emelianenko fight 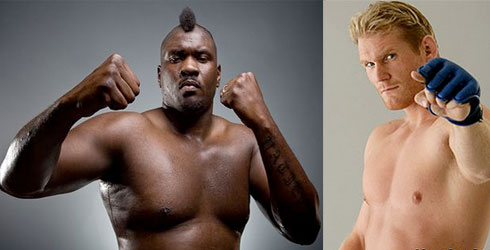 ''Keep moving. Never, never stay still. Keep moving, and you'll always find some way, some pocket, to get out of a bad situation. Especially when it comes to a ground situation.''

-- Words of wisdom from former UFC Heavyweight Champion, Josh Barnett, as he helps Brett Rogers prepare to take on the world's best heavyweight, Fedor Emelianenko, at Strikeforce: "Fedor vs. Rogers" at the Sears Centre in Hoffman Estates, Ill., on Nov. 7. Of course, Barnett was supposed to fight Fedor earlier this year at Affliction: "Trilogy;" however, he tested positive for banned substances prior to the match and the bout was scrapped. Barnett competed alongside the Russian for several years under the Pride FC banner and is among the most intelligent fighters in the sport today. If anyone can help Rogers gameplan effectively for Emelianenko it's certainly Barnett. In fact, he may even be over qualified. But will it be enough for Rogers to overcome years of experience and a much more well rounded skill set?