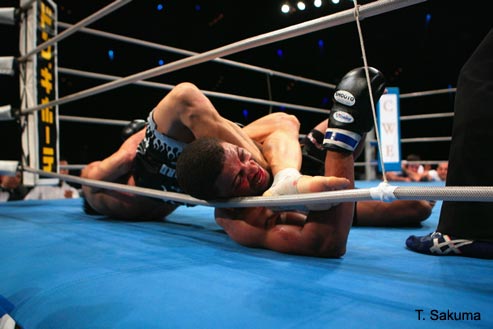 Shooto promoter Sustain resurrected the classic "Vale Tudo Japan" series on Oct. 30 at JCB Hall in Tokyo where some of the venerable Shooto stars and alumni on the card earned emphatic victories at the memorable event.

In one of the two five-rounders under the specially designated VTJ rule, current Shooto 143-pound champion "Lion" Takeshi Inoue solidified his champion status in the Shooto history book by defeating the former champion, Alexandre "Pequeno" Franca Nogueira via TKO in Round 4.

"Pequeno," the former Shooto champion, continues his devolution from the undisputed featherweight king of the world into a relic in the fast-evolving world of MMA: He has lost four of his last five fights, dating back to 2005.

Shooto pioneer and longtime fan favorite, Rumina Sato, restored himself to the winning column by making a quick work of Cory Grant via KO in the first round. Grant, fellow Team Quest member of Sato's original opponent, Joe Warren, came in as a last-minute replacement after Warren was unable to come to terms with Sustain over the provisions of the match.

Shooto bantamweight star, Mamoru Yamaguchi broke his year-long hiatus to pound out Guamanian prospect, Jesse Taitano in the first round.

In the main event of the night, former PRIDE lightweight champion, Takanori Gomi, edged past KOTC lightweight champ, Tony Hervey, after five rounds via unanimous decision. The victory is the second in a row for the former lightweight kingpin after a deflating two-fight losing streak that led to his fall from grace.

Yet, Gomi's performance was hardly what his fans expected from the "Fireball Kid" who once tore through his competition in PRIDE.

Gomi picked apart Hervey with superior stand-up and groundwork for three rounds; however, his running low on gas at the end of the third round.

He mustered every last ounce of grit to survive the fourth and fifth rounds, but with his gas severely depleted, he raised the specter of his loss to Nick Diaz at PRIDE 33: At the end of the fourth round, he struggled to walk back to his corner.

Once again, a thick cloud hovers over Gomi's future, as he seemingly has lost the luster of his reign in PRIDE.

When Gomi took the mic immediately after the fight, he was out of breath and struggled to deliver his words to the crowd. He apologized to the crowd for his performance and admitted to the lack of preparation.

Curiously enough, the announcement he had in store for the fans in JCB Hall that he alluded to during the pre-fight press conference was his desire to challenge K-1 icon, Masato on New Year's Eve. Not surprisingly, Gomi retracted his words: Masato is now set to face the newly crowned K-1 MAX winner, Georgio Petrosyan.