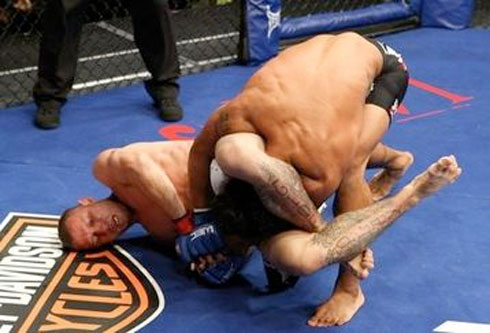 "No excuses. I take my hat off to the guy. He did what he had to do. No excuses. It was a great fight and I'm ready to do it again anytime ... I think he won the fight. Some people say it might not have gone that way, but he definitely won the fight."

-- Donald Cerrone tips his cap to Ben Henderson, saying "Smooth" did enough in their five-round, back-and-forth battle to earn the unanimous decision from the judges sitting ringside. "Cowboy" admits that he got off to a slow start -- despite several tight submission attempts in the early going -- which more than likely cost him the interim lightweight title, as well as rematch against his nemesis, 155-pound champion Jamie Varner, in the near future. But it was close. Real close. And there are more than a handful of fans who thought Cerrone should have had his hand raised when all was said and done. Are you one of them ... or do you agree with the cowboy? Talk about one helluva fight.