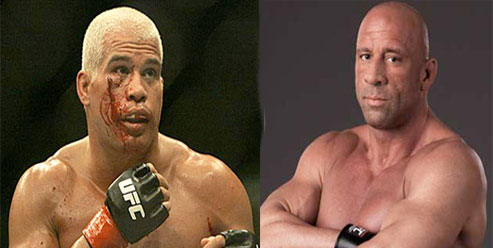 Mike Disabato, founder of MMA Authentics and long-time friend/training partner of Coleman, today "confirmed" the rumored 205-pound match up via Twitter.com. No official announcement has come from the promotion ... yet.

However, company president Dana White indicated on numerous occasions that this is the showdown that fans could expect to see in the coming months.

"The Huntington Beach Bad Boy" is coming off major spinal fusion surgery to correct a back problem that plagued him in his most recent bouts. His last appearance was in May 2008 — a unanimous decision loss to now 205-pound champion, Lyoto Machida.

It’s been more than a year since Ortiz saw action in that performance, which had him in trouble early only to nearly finish it with a triangle-to-armbar transition that "The Dragon" barely escaped.

After the loss, it appeared that the decade-long tumultuous relationship between Ortiz and White had finally reached its breaking point; however, the pair was able to miraculously mend fences just last month and put their difference aside to start making money together once again.

Ortiz has three wins, two defeats and one draw since he returned to action in 2006 from a brief hiatus. And those three victories have come at the expense of a past-his-prime, Ken Shamrock (twice), and a controversial split decision over Forrest Griffin.

Whether or not a surgically repaired back will help him return to form and make a serious run at the light heavyweight championship remains to be seen. His latest journey begins against "The Hammer."

Coleman recently notched his first win inside the Octagon in more than 12 years with a unanimous decision over Stephan Bonnar at UFC 100. "The Godfather of Ground and Pound" leveraged his strong wrestling background to takedown the "American Psycho" and keep him there, landing repeated blows from the top position.

The 44-year-old UFC Hall of Famer dropped his return to the Octagon to Mauricio "Shogun" Rua at UFC 93: "Franklin vs. Henderson" earlier this year. Coleman ended up on the wrong end of a third round technical knockout, which he felt was an unjust stoppage. It marked his first fight inside the Octagon since 1999.

Coleman has vowed that with the proper training and conditioning that he will only get better. He'll get to put that training and cardio to the test against Ortiz, who has excelled in that department ever since gassing in a fight against Frank Shamrock almost a decade ago.

Stay tuned to MMAmania.com for more on UFC 106 as the fight card develops.