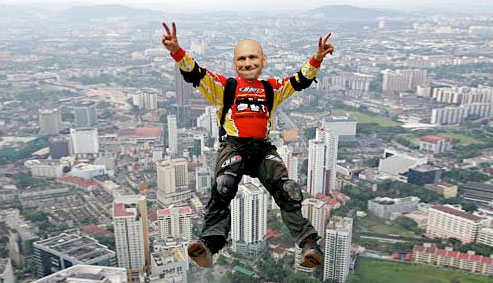 Prior to the landmark centennial pay-per-event (PPV) for the Ultimate Fighting Championship (UFC), company president Dana White promised to do a backflip off the Mandalay Bay in Las Vegas, Nevada, if the show attracted buys in the 1.5 million range.

He's apparently a man of his word.

UFC 100 on July 11 must have hit or exceeded that gaudy number because White announced during the ESPN Radio 1100 Radiothon that he would be base jumping off the 39-story luxury hotel and casino, according to ESPN.com.

And he sounded dead serious.

No date or time for the stunt was mentioned in the interview; however, the annual year-end event in Las Vegas would seem like a logical choice, putting an exclamation point on yet another banner year for business.

Of course, it’s always hard to nail down an exact figure because the information is never made public; however, with all the mainstream media coverage and the historic nature of the show, it's easy to understand the many reasons UFC 100 was so successful.

Who wouldn't flip out with those types of numbers?