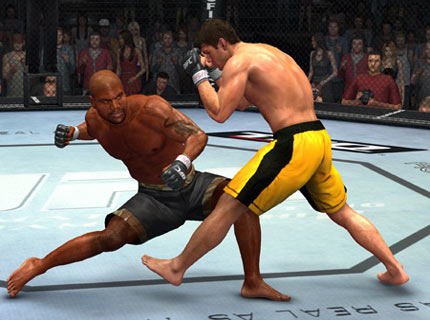 "I went to EA Sports. Know what EA Sports said? ‘It’s not a sport. This isn’t a sport. We would never get involved in something like this.’ We come out with a video game and now they want to come out with a video game? (Expletive) you. All these people that want to cry and bitch, EA Sports didn’t give a (expletive) about you and wouldn’t even touch this thing with a 10-foot pole. We went out and made this whole thing happen. THQ basically put their entire business on the line. If this game didn’t work, they were in big trouble. The great thing about this business is, the UFC brand, plus stars, equals success for everybody. So when we do a video game, you’re a guy in the video game for (expletive) ever ... and you get paid off of that forever. You think Leon Spinks is getting royalty checks somewhere? I just saw a thing on him; he’s a janitor. That’s what we’re trying to not let happen to these guys."

UFC President Dana White blasts video game publisher Electronic Arts (EA) for being a fair weather business partner. White alleges that EA wanted nothing to do with a UFC video game so he went to THQ, which put its business on the line to produce "UFC Undisputed 2009." After a wildly successful launch, EA announced a mixed martial arts video game of its own -- much to the chagrin of Dana White, who acknowledged that any UFC fighter under contract would be unemployed if they signed on to the still-in-development fighting game. EA vehemently denies banging the bandwagon and claims its MMA title has been in the planning stages for two years. So, who do we believe?