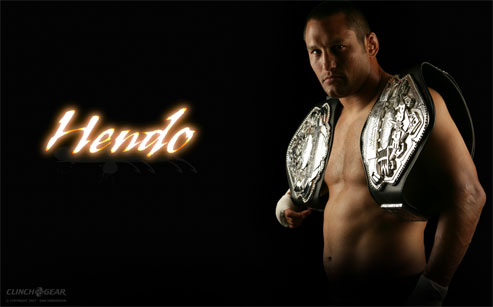 I come from the school of thought that says title holders who lose their belts deserve another crack at the title as long as they bounce back with wins (or sometimes two wins if there are other marketable contenders with a legitimate claim to the #1 contender position).

The more dominating those bounce-back performances, the quicker a former champ should get a shot.

While not a hard-fast rule, it’s also been a tradition that Ultimate Fighting Championship (UFC) matchmakers often follow. Rich Franklin earned a rematch against Anderson Silva with two solid victories, despite looking dismal in their first meeting. Quinton "Rampage" Jackson earned another title shot with two victories, but opted to fight Rashad Evans in a grudge match instead.

All Matt Hughes needed to get a rematch against Georges St. Pierre was a sloppy win over Chris Lytle.

Since losing his Pride FC title to Silva, Dan Henderson has strung together three consecutive victories against very tough opponents — and he’s done it by being the UFC’s beckon call boy, fighting at whatever weight Joe Silva and Dana White have asked him to.

Hendo’s victories over Rousimar Palhares and former middleweight champion Rich Franklin, along with his complete tooling of Michael Bisping at UFC 100 this past weekend, have demonstrated something else about the man once considered one of the best pound-for-pound fighters in the world:

An almost Randy Couture-like ability to dissect his opponents and implement the most effective strategies to win fights.

Palhares entered his fight with Henderson being hailed, along with Demian Maia, as one of two rising jiu-jitsu practitioners with perhaps the best ground game in the middleweight division (if not any division) of any promotion in the world. Back in August 2008, Henderson told MMAmania.com that he wasn’t thrilled to be matched up with an opponent who had limited fan recognition — especially one as dangerous as Palhares.

He stood everything to lose and not much to gain.

But rather than refusing to fight Palhares — as Martin Kampmann recently did when offered to fight T.J. Grant — Henderson played ball, kept the fight on the feet (his "best chance of finishing the fight") and coasted to a unanimous decision victory.

Franklin entered his fight with Henderson at 26-3, having only lost to Anderson Silva (twice) and Lyoto Machida. He sported an 11-2 record inside the Octagon and had single-handedly beaten every viable middleweight contender at the time, which is precisely why the UFC asked him to move up to 205 pounds so that "Ace" would stop derailing all its 185-pound contenders.

Despite some very different judging that night, Henderson gave Franklin one round, but took the other two in the main event to earn a split decision. It was a huge win over a formidable opponent, earning the former Olympic wrestler a spot as coach opposite Michael Bisping on The Ultimate Fighter (TUF): "U.S. vs. U.K."

And what can you say about his victory over Bisping? Without it, UFC 100’s pay-per-view card would be best remembered for a lot of decisions (to go with the undercard’s plethora of guillotine chokes) and Brock Lesnar acting like a schoolyard bully.

Henderson’s destruction of Bisping was one of the sickest ever seen inside the Octagon. It will be mentioned with the likes of Rashad Evans over Chuck Liddell, Pete Williams over Mark Coleman, and Franklin over Nate Quarry; but, admittedly, not quite as devastating as Gabe Gonzaga over Mirko "Cro Cop" Filipovic ... very likely the greatest knockout in UFC history.

The point is, it couldn’t have been more dominant. Henderson couldn’t have done anything else in that fight to make his performance more impressive.

Since returning to the promotion in 2007, Henderson has put his time in, fought whoever the UFC brass asked him to fight, did whatever the UFC asked him to do, earned his victories and then some. He deserves a title shot against Anderson Silva, but yet one wasn’t guaranteed for him with a win over Bisping at UFC 100.

I understand why the UFC said that if Bisping won, he would get an immediate title shot. A win over someone like Henderson ought to do that — that’s how good Henderson is. Plus, with UFC 105 reportedly being held in Manchester, England (Bisping’s backyard), there are few middleweight match ups as marketable as that one.

And if you’re not marketable, you won’t get a title shot ... just ask Yushin Okami.

But Dan Henderson is marketable. He’s the only man in the history of the sport to concurrently hold two belts from two different weight classes for the same major promotion (Pride FC). He has a history with the UFC for nearly as long as Couture, and at 38, he’s not getting any younger, but is still just as dominant as he’s ever been.

And his trash-talk buildup to UFC 100 proved that he can put his money where his mouth is when the UFC asks for hype.

Hendo’s critics might point to his back-to-back title defense losses to "Rampage" Jackson and Anderson Silva as a reasons he’s not the fighter he used to be. But point to a single fighter who has been asked to go five rounds in the Octagon after fighting in a much smaller ring for the decade before. We all saw what great success awaited Mirko "Cro Cop" when he switched promotions ... and he was only expected to go three rounds.

The fact that Henderson went five rounds against "Rampage" after nine years of NOT fighting inside the larger and much trickier Octagon says more for the man’s versatility than the victory said about "Rampage."

There’s one more aspect to Henderson’s marketability when it comes to a middleweight title shot: He’s the only fighter to win a round against Anderson Silva since the champion has been fighting in the UFC. And he won it handedly by implementing the smarter strategy and smothering the champion.

While the fans — including myself — would love to see the most dominant fighter in the world (I’m talking about George St. Pierre) come up in weight to fight "The Spider," GSP has already stated that he needs time to gain weight and prepare for that fight, if it’s even going to happen at all.

That time needs to be filled with a middleweight title shot against the true number one contender, Dan Henderson.