Share All sharing options for: Dan Henderson's punch on an unconscious Michael Bisping was 'just to shut him up a little bit' 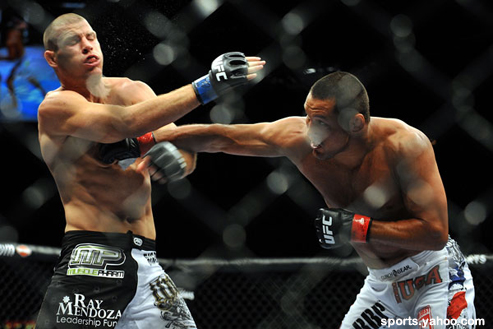 I believe I [shut him up] for a little while, I don't know if he'll ever shut his mouth completely, though. Normally, I'm not that way in fights. I know if a guy is out. I tend to stop. I knew I hit him out. I think that last one was just to shut him up a little bit."

Dan Henderson sends opposing Ultimate Fighter (TUF) 9 coach Michael Bisping a little message called humility during his middleweight fight at UFC 100 from the Mandalay Bay Events Center in Las Vegas, Nevada on July 11. "Hollywood" stalked "The Count" throughout the fight until the Brit was lured into a bone-crunching knockout in the second round. Bisping was out before he hit the canvas but that didn't stop Hendo from following it up with another shot to the chin on his fallen foe. While anti-Brits reveled in the punishment the question lingers from a sportsmanship standpoint: Does an intentional strike to a downed opponent warrant repercussions? Or do you whale away until the referee calls the bout no matter how stiff your opponent may be? Opinions please.