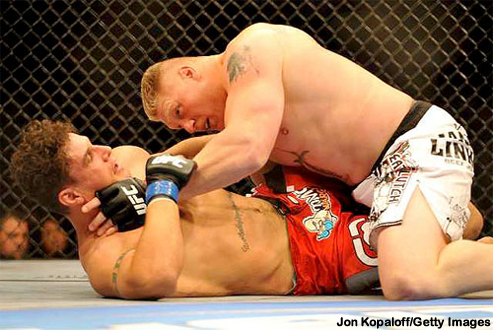 "Frank Mir had a horseshoe up his ass. I told him that a year ago. I pulled it out of him and beat him over the head with it. [Now] I'm going to drink a Coors Light. That's right a Coors. Bud Light don't pay me nothing. I may even get on top of my wife tonight."

A post-fight speech for the ages delivered by undisputed UFC Heavyweight Champion Brock Lesnar following his second round smashing of former division title holder Frank Mir. On the heels of his gruesome victory, Lesnar jawed at a dazed Mir, scoffed at the UFC sponsorship deal with Bud Light and promised wife Sable a little post-fight nookie back at the hotel. Welcome to the Lesnar era -- for better or for worse. Can anyone stop him?